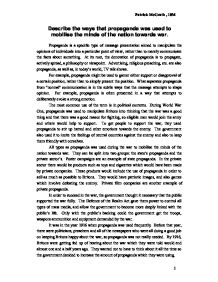 Describe the ways that propaganda was used to mobilise the minds of the nation towards war.

Describe the ways that propaganda was used to mobilise the minds of the nation towards war. Propaganda is a specific type of message presentation aimed to manipulate the opinions of individuals into a particular point of view, rather than to merely communicate the facts about something. At its root, the denotation of propaganda is to propagate, actively spread, a philosophy or viewpoint. Advertising, religious preaching, etc. are also propaganda, as well as, in today's world, TV talk shows. For example, propaganda might be used to garner either support or disapproval of a certain position, rather than to simply present the position. What separates propaganda from "normal" communication is in the subtle ways that the message attempts to shape opinion. For example, propaganda is often presented in a way that attempts to deliberately evoke a strong emotion. The most common use of the term is in political contexts. During World War One, propaganda was used to manipulate Britons into thinking that the war was a good thing and that there was a good reason for fighting, so eligible men would join the army and others would help to support. To get people to support the war, they used propaganda to stir up hatred and other emotions towards the enemy. The government also used it to incite the feelings of neutral countries against the enemy and also to keep them friendly with ourselves. All types as propaganda was used during the war to mobilise the minds of the nation towards war. They can be split into two groups: the state's propaganda and the private sector's. Poster campaigns are an example of state propaganda. In the private sector there would be products such as toys and cigarettes which would have been made by private companies. ...read more.

Pictures of triumphant British soldiers marching over conquered land would make the patriotic sign up to the army as they would think that there efforts can help the victories happen too. There were posters showing soldiers fighting, they are used to portray them as heroes, so men who had not enlisted would have as they would want to be looked at as a hero by their friends and family. Another poster created by the Ministry of Interior was used to affect other emotions of the Britons. It showed a German woman wasting water which was needed by a wounded British soldier. This was aimed at women because help on the medical side was needed. This would persuade the woman to contribute to the army because they would pity the nurse, and it would also make them feel pride, as they would know that no British woman would do such an awful thing. The feelings of escapism and reassurance were used too as they made people think that by fighting they could realise their dreams as a famous war hero like all of the ones shown all around them, or comfort you that you will not die on the front. Reassurance would also come in the form of humour, which degraded the enemy, therefore making them smaller and apparently easier to beat. Cartoons and films mocked the enemy by building on publicly recognized caricatures and stereotypes of the enemy. To prevent the people of Britain from getting a negative view about the war, the government decided to control all of the news, only showing news which would not affect the way people would think about the war into a negative way. ...read more.

Some anti-war campaigners approved of the film because it showed the horrors more truly than any previous film, but some people were shocked at the realism. Even children had propaganda forced upon them. Toys, books and comics were made to encourage patriotism and the Germans were depicted as the weak, cowardly and treacherous enemy. The English soldiers were shown to be brave, modest and successful. These products sold well as many editions of them were released even into the 1930s. A magazine called 'The Boy's Own' published a patriotic issue in October 1915, which contains an article about British boy's work in wartime. This, and other mediums like it aimed at boys, can be seen as effective as many boys chose to disguise their age and sign themselves up to fight. The public were given a clear message of what to do through the huge amounts of propaganda used. Propaganda did seem very important, as it prevented negative attitudes towards the war from the Britons. Without it weariness could have set in much earlier and the war effort would not have gone as far as it actually did. There could have been major differences in the whole war if there was no propaganda, differences which could have easily affected the Allies, such as the joining of America, the support of all of the people back home and also the amount of volunteers which might not have enlisted. Overall I think propaganda was indeed very important, especially because of the reasons listed above. It kept the minds of the Britons focused on the war effort and rallied them and allies abroad to our cause. Without propaganda the world today might have been different than it is, because without it we could have lost the war. Patrick McGrath , 10M 1 ...read more.