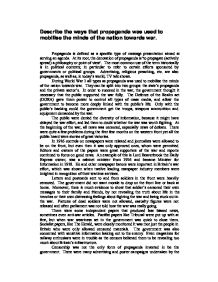 Describe the ways that propaganda was used to mobilise theminds of the nation towards war.

Describe the ways that propaganda was used to mobilise the minds of the nation towards war. Propaganda is defined as a specific type of message presentation aimed at serving an agenda. At its root, the denotation of propaganda is 'to propagate (actively spread) a philosophy or point of view'. The most common use of the term historically is in political contexts; in particular to refer to certain efforts sponsored by governments or political groups. Advertising, religious preaching, etc. are also propaganda, as well as, in today's world, TV talk shows. During World War 1 all types as propaganda was used to mobilise the minds of the nation towards war. They can be split into two groups: the state's propaganda and the private sector's. In order to succeed in the war, the government thought it necessary that the public supported the war fully. The Defence of the Realm act (DORA) gave them power to control all types of mass media, and allow the government to become more deeply linked with the public's life. Only with the public's backing could the government get the troops, weapons ammunition and equipment demanded by the war. The public were denied the diversity of information, because it might have delayed the war effort, and led them to doubt whether the war was worth fighting. At the beginning of the war, all news was censored, especially news of defeats. ...read more.

The private sector produced masses of effective propaganda of its own accord. Leading authors, like HG Wells, Arthur Conan Doyle, Thomas Hardy and Rudyard Kipling, all signed a Declaration by Authors in support of the war. Many of them, at no cost to the government, produced patriotic publications. The history department at Oxford University produced a five volume-explanation of why Britain was justified in going to war, also known as the red book because of it cover. This 'red book' sold 50,000 copies. The film industry followed the same suit, meaning the government did not even have to make its own propaganda films. British Film makers produced two hundred and forty war films between 1915 and 1918, with very few being commissioned by the war department. In film and cinema the propagandists had a whole new way of manipulating the opposition. Propaganda in films was used in two ways: two mock and ridicule the enemy and to show the truth of war. The cinema division of the Department Of Information had made short length cartoons such as the 'Bully Boy' to mock the Kaiser as early as 1914. However, the majority of the films made about the war were trying to show the reality of the trenches and battles. It is estimated that 'For the Empire', by the British Topical Committee for War Films, reached an audience of nine million people. ...read more.

Perhaps without the propaganda war weariness may have set in earlier and the war effort would not have gone very far at all. Maybe without the propaganda there would not have been enough volunteers, enough munitions, food or fuel to win the war. Maybe America would never have taken the side of the allies. Although it is hard to judge the importance of propaganda, because it depends of the attitudes of the public there is much evidence to show that it worked. The public backed the war effort despite horrific casualties. The press censored them and stayed in solid support of the war. Very few people publicly criticised the war and those that did were treated like traitors. Millions of people rushed to see film like The Battle of the Somme. Newspapers that ran the news the government wanted printed increased their circulation. Only a tiny proportion of eligible men refused to fight. During the war the public would have understood what the propaganda was trying to do to their opinions and actions. Today people would probably take a cynical look at it, but back then patriotism and going through with what your country has called you to do was a much more widely held attitude. In a sentence I believe that the propaganda was important as it kept the British people's minds focused on the war effort and rallied them and allies abroad to our cause. Without it we may not have won the war at all. ?? ?? ?? ?? ...read more.