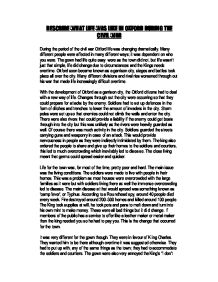 Describe what life was like In Oxford during the Civil War.

DESCRIBE WHAT LIFE WAS LIKE IN OXFORD DURING THE CIVIL WAR During the period of the civil war Oxford life was changing dramatically. Many different people were affected in many different ways; it was dependent on who you were. The gown had life quite easy were as the town did not, but life wasn't just that simple, life did change due to circumstances and the Kings needs overtime. Oxford soon became known as a garrison city, sieges and battles took place all over the city. Many different divisions and rivalries worsened through out his war that made life increasingly difficult overtime. With the development of Oxford as a garrison city, the Oxford citizens had to deal with a new way of life. Changes through out the city were occurring so that they could prepare for attacks by the enemy. ...read more.

Life for the town was, for most of the time, pretty poor and hard. The main issue was the living conditions. The soldiers were made to live with people in their homes. This was a problem as most houses were overcrowded with the large families as it were but with soldiers living there as well the immense overcrowding led to disease. The main disease at that would spread was something known as 'camp fever', or Typhus. According to a Roundhead spy, around 40 people died every week. Fire destroyed around 200-300 homes and killed around 100 people. The King took supplies at will, he took pots and pans to melt down and turn into his own mint to make money. These were all bad things but it did change. ...read more.

The gown weren't use to this. They were use to being treated like Gods in Oxford. They had many privileges (which had been taken by the king) that the town didn't; now they were being treated very much like them. The gowns were not happy. A lot of the students signed up for the Army to help with the war. As supporters of him the king expected some of the gown to sign up with out complaint. At the start of the war, the gown strongly supported the king, now they had very much changed their opinion for the worst. Life in the war affected everyone in positive and negative way. There was much change so everyone experienced being treated in different ways. The gown mainly had it good and easy but still sometimes experienced it hard. The same as the town, they mainly had it hard but there were good moments. There was much change through out the civil war. BY JOSH COLEMAN 10NW-B ...read more.