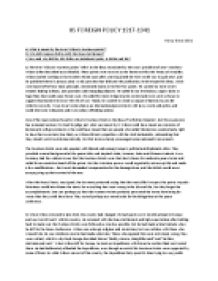 Describe Wilsons Fourteen points, Why did Congress fail to ratify the Peace Settlement?

﻿US FOREIGN POLICY 1917-1941 Henry Eshel 1ES2 a) What is meant by the term ?Wilson?s Fourteen points?? b) Why did Congress fail to ratify the Peace Settlement? c) How and why did the USA follow an isolationist policy in 1920s and 30s? a) The term ?Wilson?s Fourteen points? refers to the ideas enunciated by the USA?s president of 1917 Woodrow Wilson (often described as an idealist). These points were to serve as the framework for the Treaty of Versailles. Wilson started working on his Fourteen Points soon after America joined the First World War in April 1917, and he published them in January 1918. In his speeches that followed the publication, he developed his ideas, which were based off of four main principles, mentioned mostly in his first five points. He wanted no more secret treaties leading to deals, rash promises and entangling alliances. He called for no retribution, unjust claims or huge fines that could cause future wars. He called for more stringent arms control and even went so far as to suggest disarmament to lower the risk of war. Finally, he wanted to create a League of Nations to provide collective security. It was to act somewhat as an international government with laws, courts and police, and could intervene in disputes and even outlaw offending nations. ...read more.

The ratification of the treaty died in Congress. The deadlock between the parties and the growing amount of criticism led to entirely separate treaties with Germany and Austria Hungary, and the USA never did join the League of Nations. c) In 1920, the Republicans regained control of Congress and had gotten Warren Harding (often seen as the worst American president ever) elected. Harding and his Vice-President and successor Calvin Coolidge were convinced that America?s role globally was economic and not political. Harding assured America that his policy would be one of ?normalcy?, while his VP famously said ?America?s business is business?. And although America stayed as much as possible out of European affairs, it continued to be a reluctant player on the world stage through its economic influence and interests in Latin America and Asia. Harding left the running of international affairs to his Secretary of State, Charles Evans Hughes, and his Secretary of Commerce, Herbert Hoover. Neither of these two men were really isolationists. But between them, they formulated what would be the two pillars of American foreign policy during the 1920s: diplomatic involvement and economic involvement. The first was concerned with maintaining world peace, especially in the areas of interest to the US. The Washington Treaty of 1922 which concerned navy sizes for Britain, America, France, Italy and Japan, was meant to deal with the Japanese ?threat?. ...read more.

Neutrality was therefore rather biased. Roosevelt was quite clear on his thoughts concerning ?the enemy? in a message sent to Churchill in May 1940, but the American ambassador in London, Joseph Kennedy, thought it was futile to help a soon to be defeated country. In the 1940 presidential election, one of the main issues on the agenda was the risk of another war, and with the draft reinstated in September 1940, fears were running high. At the same time, FDR started the Manhattan Project, which would lead to the creation of the atomic bomb. In July 1941, the US imposed a total embargo and froze all Japanese assets. America was forced to abandon isolationism and enter the Second World War on the 7th of December 1941 when Japan, seeking to eliminate America?s naval power in the Pacific, launched a preemptive aerial bombing run on Pearl Harbor. Germany declared war on the US a few days later. Although this gives the impression that the peaceful innocent US was dragged into the war, America had seen growing involvement all throughout 1941 ? isolationism had been an overstatement of the US?s position in the world. Thus, the USA experienced strong counter-reactions to the war and the worsening economic situation during the 1920s and 1930s and chose to isolate itself from the world. But with its growing economic influence, the US unwittingly put itself in a position where isolationism could no longer be a viable solution, and neutrality was not an option. ...read more.