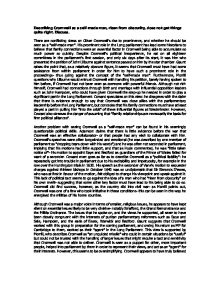 Describing Oliver Cromwell as a self made man does not get things quite right. Discuss.

Describing Cromwell as a self-made man, risen from obscurity, does not get things quite right. Discuss. There are conflicting views on Oliver Cromwell's rise to prominence, and whether he should be seen as a "self-made man". His prominent role in the Long parliament has lead some historians to believe that family connections were an essential factor in Cromwell being able to accumulate so much power so quickly. Despite Cromwell's political inexperience, he sat on all eighteen committees in the parliament's first session, and only six days after its start, it was him who presented the petition of John Lilburne against sentence passed on him by the star chamber. Gaunt raises the point that, as a relatively obscure figure, it seems that Cromwell must have had some assistance from within parliament in order for him to have such a prominent role in the proceedings- thus going against the concept of the "self-made man". ...read more.

Coward even goes as far as to describe Cromwell as a "political liability": he repeatedly got into trouble in parliament due to his excitability and impetuosity, for example in the row over the Huntingdon trials in 1630. His speech as the seconder of Vane's motion to sequester charges against thirteen bishops in October 1640 was so undiplomatic that Sir Simonds D'ewes, who was at first in favour of the motion, felt obliged to change his viewpoint and speak against it. This lack of political tact seems to go against the idea of a man who had "risen from obscurity" on his own merit- suggesting that some other key factor must have lead to his being able to do so. Cromwell did find success, however, as the country slid into civil war- as Morrill points out, Cromwell was one of a few who took initiative in these conditions- this can be seen in the way he energised the militias of his home counties. ...read more.

In conclusion, Cromwell cannot be seen as a completely "self-made man". Family connections to leading critics of royal government at the very least helped to account for his prominence so early on in the Long Parliament, despite his lack of political experience, but the view of Cromwell as a 'puppet' to those who helped him to gain his position does not seem accurate. His apparent lack of political tact also implies that Cromwell had some help in securing his position in the Long Parliament, although later, at the break of the civil war, he worked on his own initiative very successfully. His belief that he was part of a divine plan motivated and sustained him, and over time this became an increasingly important factor in his rise to prominence- overtaking the initial 'push' that his family connections gave him. However, it does seem unlikely that Cromwell would have risen to prominence in the way that he did without having connections to "pull him into the orbit" of the great reformers at Westminster. ...read more.