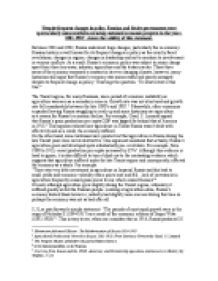 Despite frequent changes in policy, Russian and Soviet governments were spectacularly unsuccessful in securing sustained economic progress in the years 1881-1982. Assess the validity of this statement.

﻿?Despite frequent changes in policy, Russian and Soviet governments were spectacularly unsuccessful in securing sustained economic progress in the years 1881-1982?. Assess the validity of this statement. Between 1981 and 1982, Russia underwent huge changes, particularly the in economy. Russian history is well known for its frequent changes in policy as the country faced revolutions, changes in regime, changes in leadership and not to mention its involvement in various conflicts. As a result, Russia?s economic policy was subject to major change apart from three key areas, industry, agriculture and the tertiary sector. These three areas of the economy remained a constant in its ever changing climate; however, many historians still argue that Russia?s economy was unsuccessful and poorly managed despite its frequent change in policy. Thus begs the question, ?To what extent is this true?? The Tsarist regime, for many Russians, was a period of economic instability as agriculture was seen as a secondary concern. Growth rate was not structured and growth rate fell considerably between the late 1890?s and 1905.[1] Meanwhile, other economies expanded leaving Russia struggling to catch up and some historians see agriculture as a reason for Russia?s economic decline. For example, Carol. S. Leonard argued that Russia?s grain production per capita GDP was lagged far behind that of America in 1913.[2] This argument shows how agriculture in Tsarist Russia wasn?t dealt with effectively and as a result, the economy suffered. ...read more.

It was not just agriculture which suffered. Factories were nationalized by November 1920 and were geared towards war production.[19] Additionally, private trade was banned and rationing was introduced on consumer goods including food and clothing. War communism was, effectively a self destructive policy. Grain requisitioning meant more than three million people died of starvation by late 1922.[20] Moreover, money lost its value and people got by through a system of barter. Inflation shot up and multiplied 1917 costs by four million in 1922. Additionally, in comparison to the growth in city population during the Tsarist regime, people fled the cities. For example; in December 1920 the population in Petrograd fell by 57.5%[21] Lenin knew that it was time for a change. War communism caused more harm then good so Lenin came up with an alternative, the ?New Economic Policy? (NEP). Peasants were allowed to sell grain for profit and they paid tax on what they produced rather than giving it up[22]. Things also changed industrially and in the tertiary sector. Businessmen could own small or medium sized businesses however large firms were still state owned.[23] The NEP basically gave the people of Russia freedom and Lenin hoped that it would boost economic growth as well. However, in 1924, Lenin died and Stalin came to power. Stalin also brought new ideas and his own ways of modernizing the economy. ...read more.