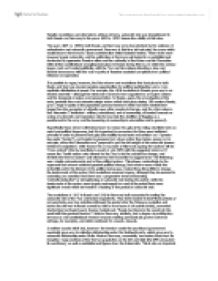 'Despite revolutions and attempts to achieve reforms, autocratic rule was strengthened in both Russia and Germany in the years 1825 to 1939.' Assess the validity of this view.

'Despite revolutions and attempts to achieve reforms, autocratic rule was strengthened in both Russia and Germany in the years 1825 to 1939.' Assess the validity of this view. The years 1825 1o 1939 in both Russia and Germany were characterised by the existence of authoritarian and autocratic government. Germany at this time did not exist, the areas which would become Germany in a loose confederation which included Austria. These states were however largely autocratic, and the unification of Germany culminated in an establishment dominated by oppressive Prussian elites and the authority of the Kaiser and his Chancellor. Little similar constitutional wrangling took place in Russia during this era, in which the century began much as it ended politically, with the Tsar and his advisers directing a slow and bloated bureaucracy with the vast majority of Russians excluded completely from political influence or expression. It is possible to argue, however, that the reforms and revolutions that took place in both Russia and Germany created genuine opportunities for political participation and a more equitable distribution of power. For example, the 1848 revolution in Prussia gave way to an elected assembly - although the electorate and seats were organised so as to give Junkers and the bourgeois massive overrepresentation. ...read more.

progressive trend of increasing "authoritarianisation" or strengthening of autocratic rule during the period: while the fundaments of the system were largely unchanged for most of the period there were significant events which did result in a bucking of the period of autocratic rule. The revolutions of 1917 in Russia and 1918 in Germany both succeeded in ending the autocratic rule of the Tsar and Kaiser respectively. They both resulted in short-lived periods of comparatively very free societies (although the period after the February revolution and before the civil war in Russia cannot be said to have been at all socially stable), somewhat shorter-lived on Russia's part. Source C points out: "Russia had become the country in the world with the greatest freedom". Weimar Germany, similarly, had a degree of participatory democracy and constitutional freedom beyond anything previously (it granted universal suffrage, for example), and which continued for around a decade. In neither country did it last, however: the freedom under the provisional government eventually gave way to collective dictatorship under the Bolshevik party, which gave way to autocratic dictatorship under Stalin. ...read more.

Yagoda suggested that no one in the leadership was safe from the machine of oppression, except probably Stalin). It is however the case that the NSDAP managed to exert control over the state and people to a greater extent than had been seen before in Germany (Gleichshaltung, it seemed, was highly successful). Overall, it is fair to say that revolutions and attempts to achieve reform did, in some instances, have significant success (in the case of the 1918 revolution and subsequent consitution), and did disrupt, dilute or destroy autocratic systems of government in both Russia and Germany. However, it is the case that those reforms were ultimately ineffective and creating lasting and stable free societies, and that in some cases the reforms in question were either aimed at preserving the status quo (as in Bismarck's Germany) or at a "dictatorship" of a different kind (in the Bolshevik's case, "of the proletariat", or in practice, of the Bolsheviks). So in terms of the entire period, the statement does have a large degree of validity in that neither country succeeded in destroying authoritarian and autocratic tendency completely and both ended the period in question with a greater degree of totalitarian rule than at any previous point in their histories. ...read more.