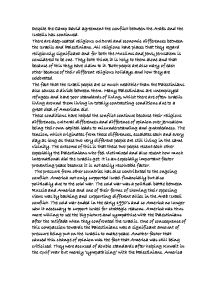 Despite the Camp David agreement the conflict between the Arabs and the Israelis has continued.

Despite the Camp David agreement the conflict between the Arabs and the Israelis has continued. There are deep-seated religious cultural and economic differences between the Israelis and Palestinians. All religions have places that they regard religiously significant and for both the Muslims and Jews; Jerusalem is considered to be one. They both think it is holy to them alone and that because of this they have claim to it. Both people are also wary of each other because of their different religious holidays and how they are celebrated. The fact that the Israeli people are so much wealthier than the Palestinians also causes a divide between them. Many Palestinians are unemployed refugees and have poor standards of living, whilst there are often Israelis living around them living in totally contrasting conditions due to a great deal of American aid. These conditions have helped the conflict continue because their religious differences, cultural differences and difference of opinion over Jerusalem being their own capital leads to misunderstanding and guardedness. The tension, which originates from these differences, escalates each and every day as long as these two very different people are still living in the same vicinity. The outcome of this is that these two people resent each other especially the Palestinians who feel victimized and also resent how much international aid the Israelis get. ...read more.

The Arabs warned to not sell oil to the West in order to manipulate the USA's influence over Israel. They expected this threat to force them into putting pressure on Israel to negotiate with the Arab states and they knew that if they didn't, the USA would risk losing their primary oil supply. It also expected that Israel takes the advice given to them from the USA in return for their economic and political aid because it is because of this aid that Israel has retained its strength. The Israeli's resent this expectation because in their eyes they refuse to accept that the aid from America should be conditional and so they resent the USA using it as a bribe to tell them what to do. This resentment meant that any advice received from the USA regarding a peace deal would be questioned as they believed that the USA were no longer interested in a true reflection of what the Israelis sought after. This factor could be said to be a somewhat noteworthy factor since the Arab states possess large amounts of the world's known oil reserves and so developments in the region profoundly affect other regions of the world therefore affecting how much international support the Arabs get. ...read more.

The West Bank is the holy land for Jews and so many Israelis criticised the Oslo accords, as they wanted to maintain the ever-increasing number of Israeli settlements in the West Bank. They saw no room for the compromises suggested in the Oslo Accords. The main reasons why the conflict has continued since 1978 are the dispute over the settlements in the West Bank and the fact that neither side is willing to compromise. This is because these are the hardest factors to resolve. Both countries regard the West Bank religiously significant (which also ties in with deep seated religious differences) and so each side insists they are entitled to ownership of the land. The fact that neither side is willing to compromise complicates this further because not only can they not live happily together because of their cultural and religious differences but it would also seem that they are unable to fairly divide the land in order to compromise because their pride won't allow it. Other factors preventing peace are the Israeli fear that the allowance of a Palestinian state is just the means to the unavoidable founding of a Palestinian state in Judea. Each and every young child is also raised sharing the deep-seated religious and cultural hatred inequalities that their parents owned. This means that this generation also shares the hatred towards their 'enemies' also Palestinians' share their desire for revenge and the Israelis' share their necessity to protect their homeland. ...read more.