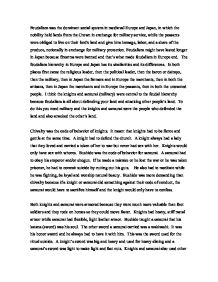 Feudalism was the dominant social system in medieval Europe and Japan, in which the nobility held lands from the Crown in exchange for military service, while the peasants were obliged to live on their lord's land and give him homage, labor, and a share of the produce, notionally in exchange for military protection. Feudalism might have lasted longer in Japan because firearms were banned and that's what made feudalism in Europe end. The feudalism hierarchy in Europe and Japan has its similarities and its differences. In both places first came the religious leader, then the political leader, then the baron or daimyo, then the military, then in Japan the farmers and in Europe the merchants, then in both the artisans, then in Japan the merchants and in Europe the peasants, then in both the unwanted people. I think the knights and samurai (military) were central to the feudal hierarchy because feudalism is all about defending your land and attacking other people's land. ...read more.

Both knights and samurai were armored because they were much more valuable than foot soldiers and they rode on horses so they could move faster. Knights had heavy, stiff metal armor while samurai had flexible, light leather armor. Bushido taught a samurai that his katana (sword) was his soul. The other sword a samurai carried was a wakizashi. It was his honor sword and he always had to have it with him. This was the sword used for the ritual suicide. A knight's sword was big and heavy and used for heavy slicing and a samurai's sword was light to make light and fast cuts. Knights and samurai also used other weapons apart from swords but they were all for short distance like the mace. I think samurais are more skilled because they are fast light-touched and have to learn: haikus, five thousand characters (words), and how to paint. We cannot know for sure who is better based on historical evidence because no knight has ever met a samurai let alone fought one. ...read more.

That meant having warriors at hand that would give it. A long period of peace and a good system of justice would make the warriors unnecessary. Knights and samurai needed wars to justify their jobs and to practice their skills. The feudal system was a warrior culture, in which loyalty to your lord, ability to fight and personal courage were top virtues. Other values, such as being knowledgeable, creative, investigating new things, working hard, looking after one's family and being kind to friends and neighbors were not appreciated as much. Today's warrior culture can be found in the military and the police, in some criminal organizations such as the Mafia or the Yakuza as well as in team sports, like rugby and American football. It is admirable in its readiness to sacrifice oneself in defense on the country or fellow warriors, but can be dangerous and bad if used to do wrong. Today's dominant culture is based on personal merit, equality of all before the law, elected government, independent justice and freedom to do what you like if it is within the law. It is a culture of good citizens rather than good warriors. ...read more.