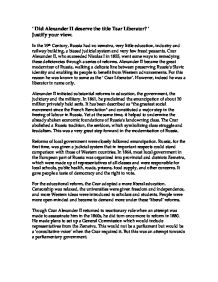 ' Did Alexander II deserve the title Tsar Liberator? ' Justify your view. In the 19th Century, Russia had no zemstva, very little education, industry and railway building, a biased judicial system and very few freed peasants. Czar Alexander II, who succeeded Nicolas I in 1855, went some ways to remedying these deficiencies through a series of reforms. Alexander II became the great modernizer of Russia, walking a delicate line between preserving Russia's Slavic identity and enabling its people to benefit from Western advancements. For this reason he was known to some as the ' Czar Liberator'. However, indeed he was a liberator in name only. Alexander II initiated substantial reforms in education, the government, the judiciary and the military. In 1861, he proclaimed the emancipation of about 20 million privately held serfs. It has been described as "the greatest social movement since the French Revolution" and constituted a major step in the freeing of labour in Russia. Yet at the same time, it helped to undermine the already shaken economic foundations of Russia's landowning class. The Czar abolished a Russia tradition, the serfdom, which symbolizing class struggle and feudalism. ...read more.

But this was an attempt towards a parliamentary government. Superficially, Czar Alexander II seemed to be so liberate from his series of reform. Yet, notwithstanding these measures, it would be wrong, as is sometimes done, to describe Alexander II as a liberal. He was in fact a firm upholder of autocratic principles, sincerely convinced both of his duty to maintain the God-given autocratic power he had inherited and of Russia's unreadiness for constitutional or representative government. For the emancipation of serfs, it was actually essential more than out of the Czar's willingness. The bulk of the Russian population, about 80%, were the peasants and serfs. Alexander II recognised that emancipation was vital. Freed men would work better than serfs, freed men would not rebel against the Czar. Alexander II believed that, unless the serfs were freed, there would be a serf rebellion that threatened the Czar position, which was the nightmare of the Czar. So, the Czar would create revolution and freed the serfs - 'Better from the above than from below.' And in fact, the serfs did not really get freedom. ...read more.

The government, after 1862, had reacted increasingly with repressive police measures. A climax was reached in the spring of 1866, when a young revolutionary, attempted to kill the Emperor. This and the other demands and rebellions had persuaded the Czar that the time had come to call a halt to reform. Therefore, Czar Alexander II returned to reactionary later on. Reaction took the usual obvious steps: censorship of the press, restriction of Zemstva powers, and more government supervision of the universities, increased activity of the Third Section i.e. the secret police set up by Nicolas I, with more arrests, imprisonment and exile to Siberia. Czar Alexander II became even more conservative. To conclude, the keynote of these reforms - and there were many lesser ones affecting various aspects of Russian life - was the modernization of Russia, its release from feudalism, and acceptance of Western culture and technology. Their aim and results were the reduction of class privilege, humanitarian progress, and economic development. However, Alexander II was not a whole-hearted reformer. He used the reforms to consolidate the Czardom, instead of catering the needs of people, this could be clearly revealed by the abolition of serfdom, returned of the reactionary rule and no any further serious reform. Therefore, Alexander II could hardly called 'Czar Liberator'. Reference ...read more.

This is a very strong response that demonstrates real understanding of the strengths and limitations of Alexander II's reforms, reaching a clear judgment. On occasion, first sentences of paragraphs could be clearer but it answers the question well. 5 out of 5 stars.