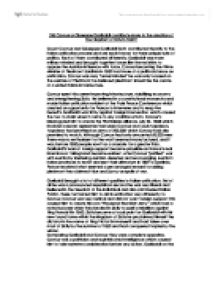 Did Cavour or Garibaldi contribute more to the unification of Italy?

Did Cavour or Giuseppe Garibaldi contribute more to the creation of the Kingdom of Italy in 1861? Count Cavour and Giuseppe Garibaldi both contributed heavily to the Italian unification process and are each known for there unique style of politics. Each of them contributed differently. Garibaldi was more military minded and brought together forces like the red shirts to oppose the Austrian influence with force. Cavour becoming the Prime Minister of Piedmont-Sardinia in 1852 had more of a political stance on unification, Cavour was very 'tunnel minded' he was only focused on the welfare of Piedmont; he believed piedmont should be the centre of a united Italian infrastructure. Cavour spent his career improving infrastructure, stabilising economy and strengthening Sicily. ...read more.

After Cavour "justified" war with Austria by sheltering Austrian deserters and encouraging Austria's Italian provinces to revolt and sent their ultimatum in 1859 to Sardinia, France received what seemed a pre arranged reward for aiding piedmont they claimed Nice and Savoy as spoils of war. Garibaldi brought a lot of different qualities to Italian unification, first of all he was a pronounced republican second he was very liberal and believed in the freedom of the individual and also a immersed Italian Patriot, these factors led him to aid in unification very differently to Cavour. Cavour was very radical and did not want foreign support; this caused him to create his own "Thousand Red Shirt Army" which had a noted success when they landed in Sicily to quell a rebellion against King Francis II in 1860. ...read more.

Also Cavour did not set out to aid Italy his main aim was to expand Piedmont into a constitutional Monarchy which is why he allowed states to be taken by and given to other countries as long as it benefited him. In conclusion I believe each contributed a great deal to the Italian unification movement but as Garibaldi's actions can only be seen to aid Italy unlike Cavour who allowed Napoleon to take Nice and Savoy so Piedmont could improve. Garibaldi's actions may have been seen as embarrassing with failures but even these failures aided Italy in some way by showing there was a resistance and they were not going to give in until Italy was free from foreign influence, and this I believe is why Garibaldi contributed a fraction more than Cavour. Lewis Montague ...read more.