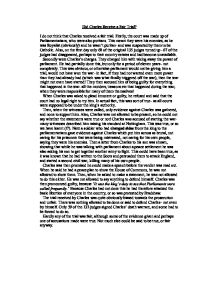 Did Charles Receive a Fair Trial?

Did Charles Receive a Fair Trial? I do not think that Charles received a fair trial. Firstly, the court was made up of Parliamentarians, who were also puritans. This meant they were his enemies, as he was Royalist (obviously) and he wasn't puritan- and was suspected by them to be Catholic. Also, on the first day only 68 of the original 135 judges turned up- 67 of the judges had disappeared, perhaps to their country estates and had become unavailable. Secondly were Charles's charges. They charged him with taking away the power of parliament. He had partially done this, but only for a period of eleven years- not completely. This was obvious, or otherwise parliament would not be giving him a trial, would not have won the war- in fact, if they had not wanted even more power ...read more.

In actual fact, this was sort of true- as all courts were supposed to be under the king's authority. Then, when the witnesses were called, only evidence against Charles was gathered, and none to support him. Also, Charles was not allowed to be present, so he could not say whether the statements were true or not! Charles was accused of starting the war- many witnesses described him raising his standard at Nottingham. This was true, or so we have learnt (!?). Next a soldier who had changed sides from the king to the parliamentarians gave evidence against Charles which put him across as brutal, not caring for his prisoners that were being mistreated, not caring for his own people, saying they were his enemies. ...read more.

Then, when he asked to make a statement, he was not allowed to do this either. He was not allowed to say anything to defend himself. Charles was then pronounced guilty, because 'It was the king's duty to see that Parliaments were called frequently.' Because Charles had not done this he had therefore attacked the basic liberties of everyone in the country, or so was protested by Bradshaw. The trial received by Charles was quite obviously biased towards the prosecution and unfair. There was nothing allowed to be done or said to defend Charles- not even by himself. Only 59 of the 132 judges signed Charles' death warrant, and some had to be forced to do so. Hardly any of the trial was fair, although some of the evidence given and perhaps one of accusations made were true. Not much else could be said to be true, or fair anyway. ...read more.