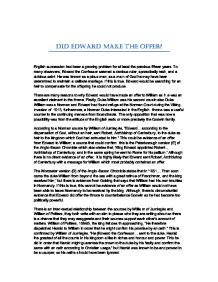 Did Edward the Confessor make an offer?

Did Edward make the offer? English succession had been a growing problem for at least the previous fifteen years. To many observers, Edward the Confessor seemed a devious ruler, sporadically rash, and a dubious saint. He was known as a pious man, as a man of God he may have been determined to maintain a celibate marriage. If this is true, Edward would be searching for an heir to compensate for the offspring he could not produce. There are many reasons to why Edward would have made an offer to William as he was an excellent claimant to the throne. Firstly, Duke William was his second cousin also Duke William was a Norman and Edward had found refuge at the Norman Court during the Viking Invasion of 1013, furthermore, a Norman Duke interested in the English throne was a useful counter to the continuing menace from Scandinavia. The only opposition that was now a possibility was from the attitude of the English earls or more precisely the Godwin family. According to a Norman source by William of Jumieg�s, "Edward... ...read more.

This he did in order that Harold might guarantee the crown to the duke by his fealty and confirm the same with an oath according to Christian usage," but Harold was known to be and proved to be a usurper, so his oaths should have been ignored. On his travels, Harold 'fell into the hands of Guy, count of Abbeville, who straightway threw him with his retinue into prison.' This was said by William of Jumieg�s and confirmed by William of Poitiers and Eadmer a pro-church and pro-Norman individual. Duke William 'sent messengers, and by force caused him to be released. Harold thereupon tarried with the duke for some time, and performed fealty to him in respect of the kingdom with many oaths.' Once again, it should be reminded that Harold is usurper. William of Jumieg�s, William of Poitiers and Eadmer all interpreted this differently but still accounted it with the same facts. Harold remained with William, and when William found out why Harold had been sent, he replied, "King Edward when years before he was detained with him in Normandy... ...read more.

Although, that was unlikely as Edward had been giving land to the Normans which may be interpreted as Edward easing the transition of having a Norman rule i.e. Duke William. Even if an offer had been made to William, does it really matter? As Edward had been making offers to many as if he was expecting not to have an heir and their were many claimants to the throne. He even made a death bed promise to Harold, "I commend this woman and all the kingdom in your protection," which the Archbishop Stigund proclaimed valid. Overall, I think that an offer was made but this does not matter as William was most likely going to claim the throne anyways as he was a relation of Edward and Norman relations were vital for England. To add to this, I believe Edwards offers were very flimsy and were not firm as an excuse to be claiment of the throne. Harold was a usurper and purgerer, and would have lost the crown with or without the help of William. To conclude; I believe an offer was made but it was flimsy. ?? ?? ?? ?? ...read more.