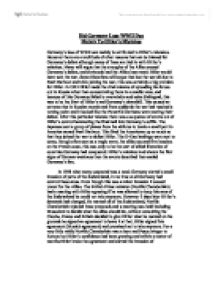 Did Germany Lose WWII Due Mainly To Hitler's Mistakes

Did Germany Lose WWII Due Mainly To Hitler's Mistakes Germany's loss of WWII can mainly be attributed to Hitler's mistakes. However there are a multitude of other reasons that can be blamed for Germany's defeat although many of these are tied in with Hitler's mistakes. Many will argue that the strengths of the Allies caused Germany's defeat, and obviously had the Allies been weak Hitler would have won the war. Some Historians will argue that lost the war all due to Pearl Harbour and USA joining the war, this was certainly a big problem for Hitler. In 1942 Hitler made the vital mistake of spreading his forces out in Russia rather than concentrating them in a smaller area, and because of this Germany failed to overwhelm and seize Stalingrad, this was to be the Start of Hitler's and Germany's downfall. This caused an extreme rise in Russian morale and from suddenly the war had reached a turning point and it looked like the Powerful Germans were nearing their defeat. After this particular mistake there was a sequence of events out of Hitler's control hammering the final nail into Germany's coffin. ...read more.

Hitler what he wanted on the grounds he signed an agreement to leave it at that, Hitler signed this agreement (Munich agreement) and promised not to take anymore. For a very little while Neville Chamberlain was a hero and Peace bringer to Europe but Hitler's confidence had been growing and within a matter of months Hitler broke the agreement and started the invasion of Czechoslovakia and then Poland. War was declared. Hitler, using Blitzkreig (Hitler's favoured tactic at war) breezed through France's 'impenetrable' defences and forced Britain and France to retreat to Dunkirk and Eventually to Britain. Hitler was now in a very powerful position, there were few honest men who could say Germany where going to lose. Hitler's confidence and possibly arrogance was growing. Now the battle in the air begun and so did Hitler's first mistake. Hitler's main priority was to win the Battle of Britain but due to British strengths it was not an easy battle. And Hitler continued this battle and also turned his forces to his Allies Russia. He was now fighting on two separate fronts on the opposite side of Europe. ...read more.

This was out of Hitler's control and a weakened Germany stood little chance against the Americans. However had Hitler not made the crucial errors with Russia Germany would have stood a good chance of fending off the Americans and wining the war. The allies had made many advancements at this point and with America on their side where ready to end the war. After these events Hitler suffered yet more defeats but this time for the German navy not the army. The battle of the Atlantic involved German U-Boats sinking allied supply ships and it raged on for the best part of the war. Churchill put the U-Boat problem at the top of his priority list. Much like the invasion of Russia it started off well for Germany but the Allies had superior technology compared to the Germans, they had the use of radars to detect German U-Boats so they were always ahead of the game. Also the allies had very efficient and cheap manufacturing of Boats and Tanks compared to Germany so were able to keep supplying their navy with more and more boats as the number of Germany U-Boats was decreasing rapidly. In 1944 the U-boat campaign was called off. The Battle of the Atlantic had been won. ...read more.