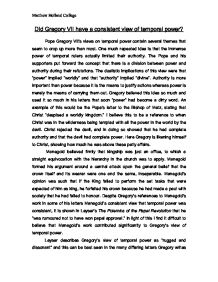 Did Gregory VII have a consistent view of temporal power?

Did Gregory VII have a consistent view of temporal power? Pope Gregory VII's views on temporal power contain several themes that seem to crop up more than most. One much repeated idea is that the immense power of temporal rulers actually limited their authority. The Pope and his supporters put forward the concept that there is a division between power and authority during their refutations. The dualistic implications of this view were that "power" implied "worldly" and that "authority" implied "divine". Authority is more important than power because it is the means to justify actions whereas power is merely the means of carrying them out. Gregory believed this idea so much and used it so much in his letters that soon "power" had become a dirty word. An example of this would be the Pope's letter to the Bishop of Metz, stating that Christ "despised a worldly kingdom." I believe this to be a reference to when Christ was in the wilderness being tempted with all the power in the world by the devil. ...read more.

This contrasts completely with the coaxing, almost bribing letter to Bishop William of Pavia urging him to support the knight Erlembad. A more famous example of Gregory's writing would be his letter to the Bishop of Metz in which he defends his condemnation of Henry IV and this shows the way that Gregory dealt with over-ambitious imperial kings. His normally constrained approach to temporal power is replaced with an unusually scathing discourse, remarking upon the unsatisfactory freedom Henry IV achieved when he tried to "shake his neck from the power of the divine Peter." Gregory believed firmly in iustitia - the right order in the world and that this clashed entirely with the "wretched and illusory" freedom as displayed by Henry IV. Henry is portrayed by Gregory as a hypocrite, "with us" [the Church] in body, but "against us [the Church] in mind and spirit." The integral part of the argument that Gregory's view of temporal power was "rugged and dissonant" is his bitter condemnation of the beginnings of kingships described in this letter. ...read more.

Reuter's reconsideration of the "Reichskirchensystem", which concludes that it did not exist as a system, sits uncomfortably with the idea that Gregory's view of temporal power was consistent. Despite the fact that kings exercised significant personal power in the nomination of bishops and abbots of royal monasteries, various factors, such as the poor communications and lack of written government meant that the Salians and Ottonians were working with the church on a very personal level, certainly governed by practical issues. These disunities within temporal power, taking account both the vast differences between the newborn Italian Kingdoms and the Imperial "Old Guard", and the internal disunities within each meant that temporal power itself was definitely "rugged and inconsistent". Ergo it is difficult to see how Gregory could have had a consistent view of it. In this atmosphere of papal revolution where being a survivor was a prerequisite Gregory could not afford to hold such a view. Specific personalities required him to use his skilled political hand appropriately, adapting it where need must. Therefore he needed an attitude towards temporal power that was elastic enough to be changed whenever the occasion arose. Matthew Holland College ...read more.