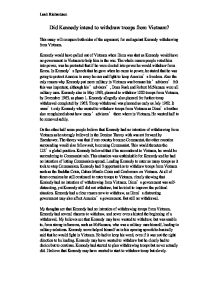 did kennedy intend to withdraw troops from vietnam?

Did Kennedy intend to withdraw troops from Vietnam? This essay will compare both sides of the argument, for and against Kennedy withdrawing from Vietnam. Kennedy would have pulled out of Vietnam when Diem was shot as Kennedy would have no government in Vietnam to help him in the war. The whole reason people voted him into power, was he protested that if he were elected into power he would withdraw from Korea. In Kennedy's Speech that he gave when he came to power, he stated that he was going to protect America in away he can and fight to keep America's freedom. Also the only reason why Kennedy put more military in Vietnam was because his 'advisers' felt this was important, although his 'advisors', Dean Rusk and Robert McNamara were all military men. ...read more.

On the other half some people believe that Kennedy had no intention of withdrawing from Vietnam as he strongly believed in the Domino Theory with was set forward by Eisenhower. The theory was that if one country became Communist, the other counties surrounding would also follow suit, becoming Communist. This would threaten the U.S's global position. Kennedy believed that if he surrendered to Vietnam, he would be surrendering to Communist rule. This situation was unthinkable for Kennedy and he had no intention of letting Communism spread. Leading Kennedy to enter as many troops as it took to stop Communism. Kennedy had 3 opportunities to withdraw troops form Vietnam such as the Buddha Crisis, Cuban Missile Crisis and Conference on Vietnam. ...read more.