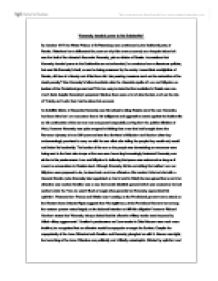 Did Kerensky hand over power to the Bolsheviks?

"Kerensky handed power to the Bolsheviks" By October 1917 the Winter Palace of St Petersburg was overthrown by the Bolshevik party of Russia. Historians have deliberated for years on why this event occurred; one viewpoint taken is it was the fault of the detested Alexander Kerensky, prime-minister of Russia. Accusations that Kerensky handed power to the Bolsheviks are not unfounded, he conducted some disastrous policies, but was this Kerensky's fault, or was he being pressured by the unruly monarchists and rightists of Russia, did fear of a bloody cout d'�tat force him into passing measures such as the restoration of the death penalty? Was Kerensky's failure inevitable after the miserable spells of Lvov and Milyukov as leaders of the Provisional government? It is too easy to state that the revolution in Russia was one man's fault, despite Kerensky's perpetual mistakes there were a lot of other factors, such as the role of Trotsky and Lenin that must be taken into account. An indelible failure of Alexander Kerensky was his refusal to bring Russia out of the war. Kerensky had been hired as Lvov successor due to his belligerent and aggressive nature against the Bolsheviks so his continuation of the war was not unexpected (especially coming from the position Minister of War). However Kerensky was quite arrogant in thinking that a war that had brought down the Romanov dynasty of over 300 years and saw the dismissal of Milyukov and Guchov (after they embarrassingly promised to carry on with the war effort after telling the people they would not) ...read more.

Kornilov was arrested later after more miscommunication and Kerensky handed arms to the Bolsheviks to stop his troops. The main failings of Kerensky were to arrest Kornilov, one of the few competent Generals who were aware of the Bolshevik threat as well as very popular. Give arms to the Bolsheviks, who at the time had support but no arms therefore this charitable offer from Kerensky handed them power. And finally to trust Lvov, which simply highlighted his total ineptitude and incompetence when handling political matters. The Kornilov threat simply highlighted the governments bad handing and instability. The final failing of Kerensky has to be his failure to appease the Bolsheviks, peasants and workers. Kerensky was hired as the successor of Prince Lvov due to his handling of the July days and his suppression of the Bolshevik agitated troops. Although when he came to power his oppression was non existence, scared of angering the Soviets (which were now becoming Bolshevik dominated) and the fact he didn't control the troops (as they were heavily influenced by the Bolsheviks and controlled by the Soviets) made it impossible for him to try and oppress the growing influence of Lenin. After the July Days the Bolsheviks were experiencing mass support, they were now controlling factories and squeezing out the Mensheviks and SR's. The Bolsheviks were becoming the alternative to the Bourgeoisie government, as I noted political polarisation was taking place and this was mirrored in the September Duma elections which saw 51% go to the Bolsheviks and 33% to the Kadets. Bolsheviks support was growing and the idea of a Bolshevik revolution was well known however Kerensky simply stood by and did nothing to stop them. ...read more.

This was not the first time the Bolsheviks had the chance to take power, personally I feel at the July days they could have walked into the Winter Palace unchallenged, so Kerensky wasn't the first leader to fail to stop Lenin. Kerensky was simply incapable of grasping the social situation of Russia, his troops were deserting, the peasants were uprising and the workers were striking, yet very little action was taken to suppress any of these groups. As Richard Abraham put it in his book "Alexander Kerensky: The First Love of the Revolution" Kerensky was in "isolation from real Russia". Kerensky's attitude was also something to be sceptical about, he was building himself off the image of Napoleon, I think posing as a despotic leader was bound to have repercussions after the downfall of the Tsar. When Kerensky came to power Russia was in massive problems, it would have taken a hero to solve them, the war was straining all their resources, the workers were in constant rebellion and the army were no longer under the Provisional Government's control, also the polarisation of political Russia was worrying. Kerensky came to be a leader because he was a bridge between the right and left, but that bridge burned and Kerensky was left alone with no support. His handling of the Kornilov affair was his biggest downfall, personally I think he should have never appointed Kornilov as Command in Chief, he was reactionary and had a past record of disregarding rules, Brusilov was a better option because of his democratic appeal. When Kornilov came into the picture the left support of Kerensky disappeared as well as the right, at this moment the Provisional Government was over. Kerensky didn't give the Bolsheviks power but made it exceedingly easy for them. ...read more.