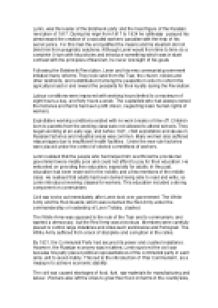 ﻿Lenin, was the leader of the Bolshevik party and the head figure of the Russian revolution of 1917. During his reign from 1917 to 1924 he ruthlessly pursued his aims toward the creation of a socialist workers? paradise with the help of his secret police. For this man the end justified the means and his idealism did not blind him from pragmatic solutions. Although Lenin would from time to time do a complete U-turn with his policies and introduce something which was in stark contrast with the principles of Marxism, he never lost sight of his goals Following the Bolshevik Revolution, Lenin and his new communist government initiated many reforms. They took land from the Tsar, the church, nobles and other landlords, and redistributed it among the peasants in order to reform the agricultural sector and reward the peasants for their loyalty during the Revolution. Labour conditions were improved with working hours limited to a maximum of eight hours a day, and forty hours a week. The capitalists who had always owned the factories and farms had been profit driven, neglecting basic human rights of workers. ...read more.

The White Army was opposed to the rule of the Tsar and to communism, and wanted a democracy, but the Red Army was victorious. Members were carefully placed to control large industries and cities such as Moscow and Petrograd. The White Army suffered from a lack of discipline and corruption in the ranks. By 1921, the Communist Party had secured its power and crushed resistance. However, the Russian economy was in tatters. Lenin survived the civil war because his party placed political representatives of the communist party in each army unit to avoid mutiny. This led to the introduction of 'War Communism', as a measure to achieve economic stability. The civil war caused shortages of food, fuel, raw materials for manufacturing and labour. Workers also left the cities to grow their food on farms in the countryside, shrinking the labour force. Faced with an economic crisis, the communist government in the Union of Soviet Socialist Republic (USSR) introduced War Communism in an effort to take charge of the economy, and to establish a structured socialist economy. The Red Army and industrial workers were fed with food confiscated from capitalists. ...read more.

The main task of the Gosplan was to devise a single economic plan for the USSR, and to develop the methods and order for implementing it. It also had to coordinate the production programmes and planning proposals for various economic institutions, devise state measures for developing the knowledge, and organizing research necessary for implementing a state economy. Another task was to deploy and train the necessary personnel to achieve its goals. Russia prospered economically until it reached the same economic level as Britain, France, Japan and the United Sates of America (USA). Gosplan's initiatives also ensured that Russia could successfully compete in the Second World War and emerge as one of the strongest superpowers in the whole world, along with the USA. The introduction of this economic policy saved the Russian economy. Peasants were encouraged to increase food production for the reward of becoming Kulaks. The New Economic Policy had many faults, despite its success in bringing economic relief in Russia. It aimed to address the social imbalances within the economic framework of Russia, but failed to do so. ...read more.