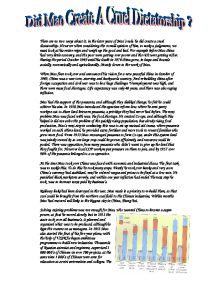 Did Mao Create A Cruel Dictatorship ?

There are no two ways about it, in the later years of Mao's rule, he did create a cruel dictatorship. However when considering the overall opinion of him, to make a judgement, we must look at his entire reign and weigh up the good and bad. For example before Mao china had very little economy, and the poor were getting ever poorer and the rich were getting richer. During the period October 1949 until his death in 1976 china grew, in leaps and bounds socially, economically and agriculturally. Mostly down to the work of Mao. When Mao first took over and announced his vision for a new peaceful china in October of 1949, China was a war-torn, starving and backwards country. And re-building china after foreign occupation and civil war was to be a huge challenge. Unemployment was high, and there were mass food shortages. Life expectancy was only 40 years, and there was also raging inflation. Mao had the support of the peasants, and although they disliked change, he felt he could achieve his aim. In 1950 Mao introduced the agrarian reform law, where he sent party workers out to share land between peasants, a privilege they had never had before. The next problem Mao was faced with was, the food shortage. ...read more.

of eduction Mao had 1 500 000 propagandist, who spread good things about him, anyone who disagreed, or showed signs of anti-communist were sent for re-education, Propaganda was at every corner. With radio speakers, loud speakers on the roadsides, and posters littered all aver the place. People had to accept it. Here is an example of one of the posters that would have been spread around Everybody learned to hide their true feelings. They learned to say and do as the party wanted them to. A good example of this false patriotism, is when Mao took a disliking to sparrows, the loyal Chinese followed suit and waged a big war against them, and killed them left, right and centre. In 1956 Mao allowed the Chinese to express there views on how China was being ran. He allowed people to critisise him, he said "let 100 flowers bloom." However he was deeply upset, when floods of criticism poored in. and in june 1957, he quickly ended the hundred flowers movement. Large numbers of people were arrested, re-educated, and lost their jobs. Mao believed that China had become backwards looking again, and needed a new revolution to inspire the people, he thought that this was the time for China to make the Great Leap Forward. ...read more.

his wife and 2 supporters were then arrested and that was the end of the line for Mao. Although he is still remembered today. We cannot judge whether Mao was a cruel dictator. Because, in the beginning he did many good things, he lead the people to revolution, he brought a generation literacy, he gave the people land, he cleaned China up, he gave the country an econonomy, he saved China from Chaing- Kai Shek, he gave normal people power, he was a great military leader, he lead a 3000 mile march of 100 000 men, he gave women rights, he gave free health care to all of China, and a rail network for trade. Today people still read the little red book, and remember his remarkable swim down the yankee river. However we cannot ignore the fact that he killed in excess of 30 000 000 people in 2 years, after creating an economy and giving people land, he then took it away or destroyed it. The conclusion that I can reach from all this, is that Mao started out a saviour to China, a wonderful leader, and in many peoples eyes he was God. But the power got to his head in the later years, and his wonderful empire went to ruins around him, because of his silly actions. And then desparate to re-claim them, he turned into a dictator, some may even say a tyrant ! By Daniel Rogers 1686 words ...read more.