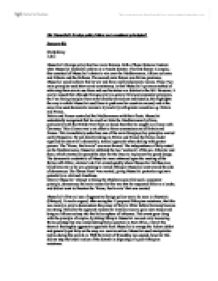 Did Mussolini's foreign policy follow and consistent principles? January 4th Chris Gray L.6.C Mussolini's foreign policy had two main features. Both of these features illustrate what Mussolini wanted to achieve as a Fascist dictator. The first feature is empire; this consisted of Mussolini's desire to win over the Mediterranean, African colonies and Albania and the Balkans. The second main feature was Italian greatness; Mussolini would achieve this by war and force and by diplomatic means. These Two main principles used show some consistency, in that Mussolini's primary method of achieving them was to use force and use his status as a dictator to the full. However, it can be argued that although foreign policy in general followed consistent principles, the Two main principles were never directly carried out individually, this highlights the way in which Mussolini used force to push smaller countries around, and at the same time used democratic means to try and ally with greater countries e.g. Britain and France. Britain and France controlled the Mediterranean with their fleets. Mussolini undoubtedly recognised that he could not take the Mediterranean by force, particularly with the British Navy fleet on hand; therefore he sought an alliance with Germany. ...read more.

Mussolini's first real use of aggressive foreign policy was to be seen in Abyssinia (Ethiopia). It can be argued, after seeing the ill prepared Ethiopian resistance, that this was merely a ploy to demonstrate the power of Italy to Hitler before Germany became too strong. However the apparent reasons for invasion were to gain more troops and bring an African colony into the Italian sphere of influence. This event goes along with the principle of empire; by taking Ethiopia Mussolini was not only increasing Italian prestige but also consolidating Italian position in East Africa, overall this shows a thoroughly aggressive approach from Mussolini to avenge the Adowa defeat and generally put Italy on the map as a warrior nation. Mussolini used manipulative tactics during this period; in 1928 the treaty of friendship was signed, however this did not stop the brutal tactics of the dictator in disposing of a poor Ethiopian resistance. Arguably the most democratic and pacifistic act by Mussolini in his foreign policy was the declaration of non-belligerence. This was a rather sly move by Mussolini, in that he waited until his allies were nearing defeat and then sided with Germany to get a share of the spoils. ...read more.

'the pact of steel', ultimately though this was not good enough, Italy was not taken seriously as a power. Concluding, Mussolini's foreign policy did follow two main principles, however these were not consistent. Mussolini's foreign policy goals were too ambitious, an error that resulted in an inconsistent foreign policy because he constantly promised things that he could not deliver, resulting in violence to try and solve the problem. At times Italy was seen as a welcome ally to Western democracies, however aggressive actions showed that Italy could not be true to their word and keep the peace. Neither method involved in foreign policy had any success, emphasising the ambitious nature of the aims, but with regards to consistency Mussolini seemed incapable of delivering any. In the 1920's Mussolini used the League of Nations and diplomacy to negotiate concessions, he makes himself useful to Great Britain and France to get help. However actions in the Balkans and Corfu in 1923 show that Mussolini was simply trying to use the two powers, as he did not think they would stop him using aggressive tactics. Foreign policy was unsuccessful, this is due to the inconsistency of the principles behind it. ...read more.