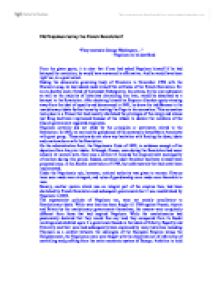 Did Napoleon betray the French Revolution?

Did Napoleon betray the French Revolution? "They wanted a George Washington..." - Napoleon on his deathbed From the given quote, it is clear that if one had asked Napoleon himself if he had betrayed the revolution, he would have answered in affirmative. And he would have been right too, to a great extent. Ending the democratic governing body of Directoire in November 1799 with the Brumaire coup, he had indeed made himself the antithesis of the French Revolution. For an ex-Jacobin and a friend of Alexander Robespierre, his actions, by his own admission as well as the majority of historians chronicling him later, would be described as a betrayal to the Revolution. After declaring himself an Emperor (thereby openly straying away from the ideal of equality and democracy) in 1801, he drove his indifference to the revolutionary ideals further home by inviting the Pope to his coronation. This coronation took place in a France that had recently abolished the privileges of the clergy and whose last King had been imprisoned because of his refusal to declare the members of the Church government regulated employees. ...read more.

The expansionist policies of Napoleon too, were not exactly conciliatory to Revolutionary ideals. While wars had also been fought till 1799 against Prussia, Austria and Britain by the revolutionary governments themselves, the reasons were completely different from those that had inspired Napoleon. While the revolutionaries had passionately declared that they would free any land they conquered from its feudal workings and establish upon it a government based on the ideals of Liberty, Equality and Fraternity and their wars had subsequently been explained by many historians including Thomson as a conflict between the ideologies of the European Empires versus the Enlightenment, the Napoleonic wars were fought with the objectives not of reform but of controlling and profiting from the entire economic system of Europe. Ambition to hold every empire in a peace treaty favorable to France's development had spurred Napoleon onto wars with Britain, Germany and Russia. Thus, from these facts it is highly believable that Napoleon was a despot and hence a betrayer of the Revolution. ...read more.

The revolution had started with economic and social instability. Napoleon was successful in restoring the socio-economic stability of France. His reign had been, internally, at least, the most peaceful in the decade. So, as far as the necessities that had led "the mildest men to be agitated" (Wordsworth) and the reign of terror to be unleashed were concerned, they had finally been resolved by a firm leader. In so far, Napoleon, instead of betraying the revolution, was actually fulfilling the words of the British politician Edmund Burke who had stated years before that the "uncontrolled passion" and violence of the Revolution would end in the dictatorship of a soldier someday. To conclude, while it is tempting to believe that Napoleon led France from its Revolutionary ideals into an absolutist government and a colonial mentality, we must remember that Napoleon was more of the inevitable conclusion of the bloodbath and internal strife of the past decade than the precursor of a twentieth century dictatorship. And though his was a despotic rule, it was a benevolent despotism and like the Revolutionaries themselves, his first and greatest priority was always France. ...read more.