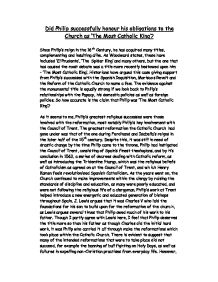 Did Philip II successfully honour his obligations to the Church as 'The Most Catholic King'?

Did Philip successfully honour his obligations to the Church as 'The Most Catholic King'? Since Philip's reign in the 16th Century, he has acquired many titles, complementing and insulting alike. As Woodward states, these have included 'El Prudente', 'The Spider King' and many others, but the one that has caused the most debate was a title more recently bestowed upon him - 'The Most Catholic King'. Historians have argued this case giving support from Philip's successes with the Spanish Inquisition, Moriscos Revolt and the Reform of the Catholic Church to name a few. The evidence against the monumental title is equally strong if we look back to Philip's relationships with the Papacy, his domestic policies as well as foreign policies. So how accurate is the claim that Philip was 'The Most Catholic King'? As it seems to me, Philip's greatest religious successes were those involved with the reformation, most notably Philip's key involvement with the Council of Trent. The greatest reformation the Catholic Church had gone under was that of the one during Ferdinand and Isabella's reigns in the later half of the 15th century. Despite this, it was still in need of drastic change by the time Philip came to the throne. ...read more.

Firstly, the government deliberately attacked the silk industry, which was the principal source of the Morisco's livelihood. Secondly, the Moriscos were never really accepted into Spanish society, and were looked down upon by the Orthodox Catholics. The final factor was the Spanish Governments interference with the Moriscos involvement with the Turks in North Africa, who had been known to prey on Spanish exports and trades. The revolt quickly turned in favour of the Moriscos as they captured 182 villages. Threats of deporting all Moriscos from Granada caused further upheaval, and the leader of the revolt, Mondejar, was replaced by Don John of Austria. Woodward argues that by 1570 the revolt was more of a 'bloody civil war', as brutal atrocities were inflicted upon the Christian population. Upon Philip's arrival in Cordoba that March, he reissued the orders for deportation, as tens of thousands of Moriscos were uprooted and sent on their way as all were removed from Granada. At this point he offered the rebels a pardon if they surrendered which they did, and the leading powers arrested. Historians like Williams have slated Philip's dealings of the Moriscos revolt, arguing that it exposed too many of Spain's weaknesses, and Woodward argues that Philip acted too slowly in the first real protest he had faced. ...read more.

By 1562, Protestantism had been completely wiped out from Spain. Kamen argues that the key to the Inquisitions success was its use of striking fear in the hearts of those who would be prosecuted. The sheer horror of what would face them scared them into reverting back to Catholicism. McKinnon-Bell has accused Philip's work with the Inquisition as being purely ethnic cleansing, and historians such as Netanyahu have even compared his work to that of the Nazi persecution. It cannot be argued that all in all, the Inquisition was not effective. Within 5 years, Philip had eradicated all Protestantism within his kingdom, which is impressive by any standards, especially look back at previous monarchs who had taken much longer than this and never achieved this final result. With the work of the Inquisition, Philip showed his determination to make sure Catholicism could not be threatened, and when looking at the statistics of only 250 out of 40,000 being killed, it is by far too extreme to say that it was more of an ethnic cleansing process. Woodward supports the more positive view also, saying that 'the Inquisition played an important part in increasing the number of Orthodox Spanish Catholics and strengthening Christian Education'. I feel Philip's involvement with the Inquisition shows that his deserves the historic title that has been bequeathed to him. ...read more.