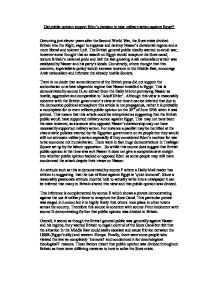 Did public opinion support Eden's decision to take military action against Egypt? Occurring just eleven years after the Second World War, the Suez crisis divided Britain into the Right, eager to suppress and destroy Nasser's dictatorial regime and a more liberal and tolerant Left. The British general public ideally wanted to avoid war, however some thought that an assault on Egypt would recapture the Suez canal, restore Britain's national pride and halt the fast growing Arab nationalism which was catalysed by Nasser and his party's ideals. Conversely, others thought that this coercive, imperialistic policy would increase tensions in the Middle East, encourage Arab nationalism and infuriate the already hostile Soviets. There is no doubt that some elements of the British press did not support the authoritarian or at best oligarchic regime that Nasser installed in Egypt. ...read more.

This means that this article could be interpreted as suggesting that the British public would have supported military action against Egypt. This may not have been the case however, as someone who opposed Nasser's dictatorship may not have necessarily supported military action. For instance a pacifist may be horrified at the chauvinistic policies exerted by the Egyptian government on its people but they would still not advocate military action especially if they considered Eden's motives for war to be economic not humanitarian. There were in fact huge demonstrations in Trafalgar Square set up by the labour opposition. So whilst this source does suggest that British public opinion at the time was anti Nasser it does not give a comprehensive insight into whether public opinion backed or opposed Eden as some people may still have condemned the attack despite their views on Nasser. ...read more.

This particular protest was staged in London but it is highly likely that others took place in other towns across the country. Therefore this source is coherent with source F but incoherent with source D demonstrating further that public opinion was divided in Britain. Overall, it seems as though the British general public was generally against Nasser and his regime, they wanted Britain to regain control of the Suez Canal but felt that the situation in the Middle East could easily escalate and cause friction between the USSR (Egypt's ally) and western Europe. Finally, there were some people who viewed the war as completely 'immoral' and condemned it for deontological ideological? reasons. These factors meant that public opinion was divided throughout Britain as there were differing views as to how to solve the Suez crisis. ...read more.