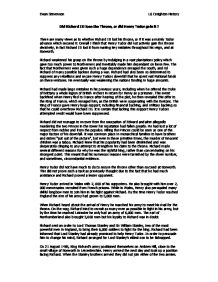 Did Richard III lose the Throne, or did Henry Tudor gain it?

Did Richard III lose the Throne, or did Henry Tudor gain it? There are many views as to whether Richard III lost his throne, or if it was a mainly Tudor advance which secured it. Overall I think that Henry Tudor did not actively gain the throne decisively, in fact Richard III lost it from making key mistakes throughout his reign, and at Bosworth. Richard weakened his grasp on the throne by indulging in a vast plantations policy which gave too much power to Northerners and inevitably made him dependant on these few. The fact that Northerners were given such a huge dependence enraged the South, and rid Richard of many possible backers during a war. Richard had also been so determined to suppress any rebellions and secure Henry Tudors downfall that he spent vast National funds on these ventures. He eventually was weakening the nations funding in huge amounts. Richard had made large mistakes in his previous years, including when he offered the Duke of Brittany a whole legion of British Archers in return for Henry as a prisoner. ...read more.

Richard made several different reasons for why he was the rightful king, rather than concentrating on his strongest point. This meant that his numerous reasons were tarnished by the sheer number, and sometimes, circumstantial evidence. Henry Tudor did not have much to do to secure the throne other than succeed at Bosworth. This did not prove such a task as previously thought due to the fact that he had much assistance and Richard proved a lesser opponent. Henry Tudor arrived in Wales with 2, 000 of his supporters. He also brought with him over 2, 000 mercenaries recruited from French prisons. While in Wales, Henry also persuaded many skilful longbow men to join him in his fight against Richard. By the time Henry Tudor reached England the size of his army had grown to 5,000 men. When Richard heard about the arrival of Henry he marched his army to meet his rival for the throne. On the way, Richard tried to recruit as many men as possible to fight in his army, but by the time he reached Leicester he only had an army of 6,000 men. ...read more.

Richard had a larger army with vast support from Northumberland (shown at the back of the forces) and from Norfolk (as the vanguard). Richard instead of striking a good defensive position, attacked down the hill, sacrificing his position. Richard did not think and consider his options before he made the offensive, he acted rashly and launched the offensive in a heat of rage. Northumberland is seen at the back of the battle, which was poor planning seeing as Richard should have doubted his loyalty. If he wanted to make sure Northumberland was involved in the battle and actually fought for him, he should have placed him at the front of the forces, to ensure he was in the conflict. Northumberland had been plotting against Richard since he had over looked him for the post of Leader of the North. Instead John De La Pole was appointed and this made Northumberland very jealous. Northumberland recognised his fortunate chance to deceive Richard and did not join in the fighting, leaving Richard open at the back, and with much less men than previously assumed. This was the deciding event that lost Richard his throne. Ewan Stevenson L6 Creighton History ...read more.