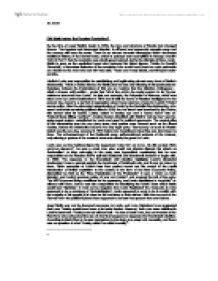 Did Stalin betray the Russian Revolution?

Did Stalin betray the Russian Revolution? By the time of Josef Stalin's death in 1953, the face and structure of Russia had changed forever. Two leaders had interpreted Marxism in different and apparently opposite ways and the country still bore the scars. There is an almost romantic stereotype which dominates traditional history of the Soviet Union, which is perhaps best exemplified in George Orwell's 'Animal Farm'; that the revolution was wholly good-natured, led by the disciple of Marx, Lenin. Stalin is seen as the egotistical tyrant who betrayed his father figures. Trotsky is Orwell's 'Snowball', a blameless defender of the revolution who would have been far more preferable as a leader to the man who sent him into exile. These are merely ideals, and fall apart under scrutiny. Vladimir Lenin was responsible for establishing and legitimating almost every facet of Stalin's dictatorship. This is a viable defence for Stalin; that he was only following in his predecessor's footsteps. Indeed, the implications of this are so massive that the historian Volkogonov - albeit a known anti-Leninist - wrote that "all of the evil in the soviet system in its 74-year existence stemmed from Lenin". ...read more.

It is ironic that Stalin took Hitler at his word while apparently distrusting the vast majority of the population of his own country and the entire outside world. The 'Great Patriotic War', itself a contradiction in terms as a Marxist leader has to discourage nationalism rather than encourage it if he is to call himself Marxist at all, saw more hypocritical actions on Stalin's part, not least the toleration of religion exclusively as a morale boost; this could only have been seen as heresy for the committed atheists Marx and Lenin. This was little more than 'opium for the masses' in a time when they needed to forget the dual horror inflicted on them by the invaders and their own government. The most damning criticism of Stalin is not just that he was "corroding the soul of bolshevism", as Trotsky saw it, but that he was not furthering the revolution at all and in failing to do so his government was a counter-revolution. As Orwell pointed out in his book 'Animal Farm', certainly by the time of Stalin's death few people could trust their memories of what life was like before the revolution as they had been told so many half-truths and lies. ...read more.

The attempt to turn a pre-industrial country into a Communist power while bypassing the necessary middle stage of capitalism eventually turned out to be such a failure that he "consigned Marxism to the historical scrapheap"5. Lenin betrayed Marxism by bringing about a revolution in the wrong country at the wrong point in its development, and also betrayed the revolution itself with his tools of manipulation and terror. Stalin betrayed any common decency Lenin may have kept and used the system inherited from him to terrorise his people for his own security. If Marx and Engels would have tolerated such extreme deviation in order to sustain the workers' revolution in the long term, then Stalin was acting in the best interests of the USSR. However, taking into account the fact that Marx and Engels foresaw Communism as a 'utopia', it was not in reality even a 'dictatorship of the proletariat' in any shape or form, since the people had no say in how their lives were run under Lenin or Stalin. Even by the time of Brezhnev's death 27 years after Stalin's, the basis of a society which punished 'senseless dreams' with persecution, death or a spell in a prison camp was still in place. The theoretical difference between Tsarist and Communist Russia was huge; the practical difference in the end was minimal. ...read more.