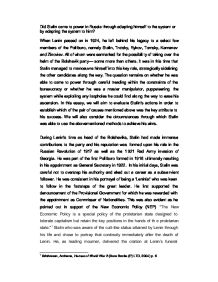 Did Stalin come to power in Russia through adapting himself to the system or by adapting the system to him?

Did Stalin come to power in Russia through adapting himself to the system or by adapting the system to him? When Lenin passed on in 1924, he left behind his legacy to a select few members of the Politburo, namely Stalin, Trotsky, Rykov, Tomsky, Kamenev and Zinoviev. All of whom were earmarked for the possibility of taking over the helm of the Bolshevik party- some more than others. It was in this time that Stalin managed to manoeuvre himself into this key role, strategically sidelining the other candidates along the way. The question remains on whether he was able to come to power through careful treading within the constraints of the bureaucracy or whether he was a master manipulator, puppeteering the system while exploiting any loopholes he could find along the way to ease his ascension. In this essay, we will aim to evaluate Stalin's actions in order to establish which of the pair of causes mentioned above was the key attribute to his success. We will also consider the circumstances through which Stalin was able to use the abovementioned methods to achieve his aims. During Lenin's time as head of the Bolsheviks, Stalin had made immense contributions to the party and his reputation was formed upon his role in the Russian Revolution of 1917 as well as the 1921 Red Army invasion of Georgia. ...read more.

On the other hand, Stalin was able to exploit the vulnerabilities of his opponents and mask his shortcomings. Such was his masterstroke as he manipulated his foes to nothingness. Stalin had perfected the tools of the system and the recruitment process. Through his power of patronage as the General Secretary, he had strategically placed his associates in key positions within the party who he could rely on to elevate him to the highest office of the party when the time came.4 Stalin then moved on to eliminate his opposition in order of their perceived threat. He struck out first against Trotsky. Coupled with being a strong orator and brilliant strategist, Trotsky was a thorn in Stalin's flesh and they could not often see eye-to-eye which probably accounts for him being the first Stalin chose to position within his crosshair. Forming a triumvirate with Kamenev and Zinoviev, Stalin was able to oust Trotsky from the position of Commissar for War by ensuring that the 1925 Party Congress was attended by a pro-Stalin, anti-Trotsky audience. Having done so, he turned his sights on Kamenev and Zinoviev who suddenly realised their vulnerable position on the left. Their attempt to re-align themselves with Trotsky proved to be too little too late for Stalin had now an iron-fisted control over the party and was able to overturn their vote of no confidence with relative ease. ...read more.

Stalin was also able to exploit factionalism, which had been introduced by Lenin in order to ensure solidarity within the party, to use as a convenient excuse when he needed to oust any opponents he felt were obstacles to his ascension. To sum up, it would appear that Stalin adapted himself to the system in areas that were more conservative that would have been risky to adopt radical change to such as the need to keep congruence with Lenin's ideals and beliefs due to his god-like influence. At the same time, he adapted the system to himself after he had laid the groundwork and was sure there would not be any political backlash due to his radical actions. Not forgetting the favourable circumstances presented to him at that time, Stalin was certainly proactive in his actions and while it may be difficult to simply pick out whether Stalin had adapted to the system or adapted the system to suit him, one thing is certain. Stalin was certainly a manipulative chameleon. (1353 words) excl. footnotes 1 Srinivasan, Archana, Heroes of World War II (Sura Books (P) LTD, 2004) p. 6 2 Grey, Ian, Stalin, Man of History (Sphere, 1982) 3 Carr, E. H., Soviet Studies Volume V (Taylor & Francis, Ltd., 1953) p. 4 4 Willerton, John P., Patronage politics in the USSR (Cambridge, 1992) pp. 27-33 5 Lynch, Michael, From Autocracy to Communism: Russia 1894-1941 (Hodder Education, 2008) pp. 182-199 6 Service, Robert, Stalin: A biography (Pan, 2005) ?? ?? ?? ?? ...read more.