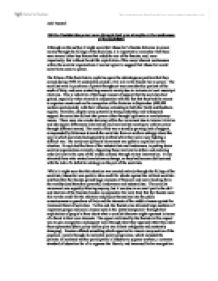 Did the Fascists take power more through their own strengths or the weaknesses of the Socialists?

Did the Fascists take power more through their own strengths or the weaknesses of the Socialists? Although on the surface it might seem that Mussolini's fascists did come to power mainly through the failings of the Socialists, it is important to remember that there were several other key factors that aided the rise of the fascists, and, more importantly, that without the skilful exploitation of the many inherent weaknesses within the socialist organisations it seems logical to suggest that Mussolini would never have come to power. The failure of the Socialists to capitalise upon the advantageous position that they earned during 1919-21 undeniably played a vital role in the fascist rise to power. The socialists were in positions of power throughout very considerable portions of the south of Italy, and were controlling councils mainly due to victories in local municipal elections. This is indicative of the huge amount of support that the socialists had gained, especially when viewed in conjunction with the fact that they had the means to organise events such as the occupation of the factories in September (400,000 workers participated), with their influence extending to both the North and Southern regions. However, despite some potentially strong leadership and widespread support, the socialists did not take power either through legitimate or revolutionary means. There were also cracks showing within the movement due to internal rivalries and ideological differences (minimalists and maximalists wanting to achieve power through different means). ...read more.

A general strike was called in anticipation of the Fascist march on Rome, and it was a spectacular failure. Many were unwilling to take part, or unwilling to oppose fascism in any way (a large number of former socialist workers had needed to defer to fascism simply to find work in the growing anti-socialist climate) and the strike was called off after one day. This served as a monument to the success of fascism as a movement with the primary intention of smashing socialism, and increased the confidence of the industrialists and middle classes who had aided the fascist rise to power with financial support. At this time, however, the fascists did also demonstrate other skills that were necessary (without any relation to weaknesses within the socialist party) that were to be instrumental in their rise to power. They were able to manipulate public mood and that of the authorities, through giving the impression that they were far greater and more powerful than their numbers suggested. The seizure of key points within Rome on the 27th October was carried out by around a fourth of the planned number, yet the town prefects and authorities offered little resistance in the fear that they would be overwhelmed by the sheer force of the fascist armies. This was another element of fascism that led to their assumption of power, the ability to gain the support of the authorities. ...read more.

of militant fascists, and it seems that had Mussolini not renounced it he may have lost a great deal of vital support. This gives rise to the idea that Fascism did indeed need the socialists in order to provide a tangible enemy which they could publicly repel. It should also not be presumed that the only party whose failings gave rise to fascist power was the socialists-the liberal government was also deeply unpopular due to its reluctance to take a definite position on conflicts arising between those on the right (industrialists and fascists) and those on the left (militant trade unions). In conclusion, it seems that although the majority of the situations that allowed the fascists to exert their influence and assert an authoritative control over matters of social unrest and hardships in Italy were brought about due to failings within the socialist movement, it was down to the skills developed and tactics employed by fascist leaders that allowed them to make full use of the opportunities that had arisen. Perhaps the most effective illustration of this is the impression of the neutralisation of the socialist threat projected by the fascists, despite the fact that the movement was already on the decline when the fascists began to confront it. Similarly, there does seem to be a larger number of factors that allowed the fascists to take power that were brought about by the appeal and tactics of the movement rather than socialist failings. ?? ?? ?? ?? Jack Tunstall ...read more.