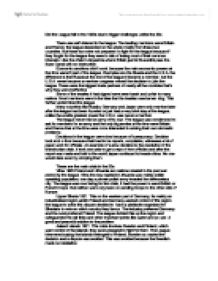 Did the League fail in the 1930s due to bigger challenges unlike the 20s There was self-interest in the league. The leading members were Britain and France; the league depended on the whole mostly from these two countries. But these two were not prepared to fight for the league because if they fought for the league they were in risk of losing most of their common interests. Like the crisis in Abyssinia where Britain just let Mussolini pass the Suez Canal with no obstruction. Economic sanctions didn't work because the main economic powers at the time weren't part of the league. Examples are the Russia and the U.S.A. the difference is that Russia at the end of the league it became a member, but the U.S.A. never became a member congress vetoed the decision to join the league. These were the biggest trade partners of nearly all the countries that's why they were ineffective Some of the treaties it had signed were seen harsh and unfair to many nations. ...read more.

The industry preferred Germany and the rural preferred Poland. The league divided this up the region and safeguarded the rail links and other important points like water and power. A good and peaceful solution to the problem Aaland Islands 1921. This crisis involves Sweden and Finland, which want control of the islands; they even prepared to fight for them. The League intervened saying the islands belonged to Finland, Sweden accepted the decision and a dispute was avoided. This was avoided because the Swedish made no retaliation. Corfu 1923. After the war this was like biggest dispute after the war. The crisis starts when a Italian General appointed by the League to view border control between Greece and Albania is assinated. Mussolini blamed Greek government for the assination. He demanded compensation by executing the murderers. Nothing was done and he bombed Corfu. Greece appealed at the League and the league condemned his actions but Greece was forced to compensate the Italians by paying them. ...read more.

Mussolini was very sneaky during the peace talks in the league his own Generals were preparing an even bigger offensive. The measures the league took were 0. They just talked. This was the biggest proof that the league was ineffective without Britain and France. I believe that the League doomed from the start. It could never have woked out with the problems stated above. All of these crisis were medium sized comparing them with Abyssinia or Manchuria where their were real wars fought. If a real crisis would up rise the League would definitely be ineffective and offer absolutely no protection at all. The challenges in the 30s were of no much bigger scale than the ones in the 20s. From the above statements I found out that the on first time it was called to intervene it was ineffective and that shows something. Without everybody present it was impossible to be successful and if there are countries not present like the USA it's impossible. Their were 2 countries which believed in the League to some extent this extent was as far as no British or French troops were harmed. ...read more.