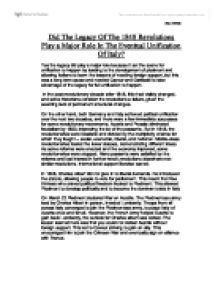 Did The Legacy Of The 1848 Revolutions Play a Major Role In The Eventual Unification Of Italy? Yes the legacy did play a major role because it set the scene for unification to happen by leading to the development of piedmont and allowing Italians to learn the lessons of needing foreign support, but this was a long term cause and needed Cavour and Garibaldi to take advantage of the legacy for full unification to happen. In the post-revolutionary decade after 1848, little had visibly changed, and some historians consider the revolutions a failure, given the seeming lack of permanent structural changes. ...read more.

This meant that free thinkers who craved political freedom flocked to Piedmont. This allowed Piedmont to develop politically and to become the dominant state in Italy On March 22 Piedmont declared War on Austria. The Piedmontese army lead by Charles Albert in person, invaded Lombardy. Troops from all across Italy converged to join the Piedmontese army, to purge Italy of Austria once and for all. However, the French Army helped Austria to gain back Lombardy, the outlook for Charles albert was defeat. The lesson learned here was that you could not defeat Austria without foreign support. This led to Cavour striving to gain an ally. ...read more.

If it wasn't for Garibaldi's actions in Sicily and Naples, Italy would have remained only partly unified. Overall, the legacy of the revolutions set the scene for the unification of Italy by Developing Piedmont as the dominant state in Italy, centralising those who wanted unification in one place. However, it needed a skilled politician, in the form of Cavour, to take advantage of the situation and put Piedmont onto the world stage, which allowed a piedmont/French alliance to develop and expel Austria, but it was the actions of Garibaldi which allowed full unification to take place. The legacy of 1848 certainly played a major role in unification, however it needed individuals to learn from the legacy for Italy to become one state. Top of Form ?? ?? ?? ?? Alex White ...read more.