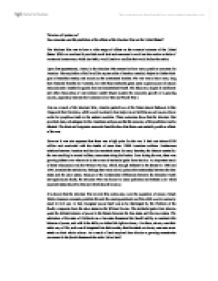 Did the Mexican War poison the United States?

"Mexico will poison us." How accurate was this prediction of the effects of the Mexican War on the United States? The Mexican War was to have a wide range of effects on the eventual outcome of the United States. While on one hand it provided much land and resources it would set into motion a chain of events and controversy which inevitably would lead to a conflict that would define the nation. Upon first appearances, victory in the Mexican War seemed to have many positive outcomes for America. The acquisition of half a million square miles of territory certainly helped to further their goal of Manifest Destiny and round out the continental borders. The war was to have many long term financial benefits for America, for with these territorial gains came a great source of natural resources and a market for goods from an industrialised North. The discovery of gold in California and other discoveries of vast mineral wealth helped sustain the economic growth of a growing country, especially between the American Civil War and World War I. ...read more.

Because of the fundamental differences between the industrial North and agricultural South, the Mexican War was bound to cause problems and debates over which acquired states should be free and which should be slave. It is shown that the Mexican War revived this controversy over the expansion of slavery. Ralph Waldo Emerson accurately predicts this and the ensuing sectional conflict which would eventually result in civil war. In fact, Congress' power itself was to be challenged by the Platform of the South, a response from the slave states to the Wilmot Proviso. The territorial gains from Mexico upset the delicate balance of power in the Senate between the free states and the slave states. The admission of the state of California as a free state threatened the South's ability to maintain this balance of power, and with it the ability to defend it's right to slavery. For them, slavery was their entire way of life, such was it integrated into their society that the attack on slavery was seen as an attack on their whole culture. ...read more.

It caused around 1.03 million deaths including 620000 soldiers in what was America's bloodiest conflict. As terrible as this outcome was, the victory of the Union over the Confederacy finally ended slavery within the conquered states and paved the way for America to truly embody the values of freedom and equality. The Civil War was essential in resolving the nation of a conflict neither side was willing to conclude through peaceful measures. Most interesting is the question of whether the effects of the Mexican War caused the Civil War to occur, or whether it served merely as a catalyst to accelerate a conflict that was eventually inevitable. Although the prediction of Mexico poisoning America was true, there were many more aspects to it than that. The great wealth of the lands America acquired would prove to be an invaluable asset that would help develop it into an economic and continental superpower by the turn of the century. While the price was high, America recovered from the "poison" and became a stronger nation through the process. Ironically, the Mexican War produced effects that would eventually create a truly United States of America. ...read more.