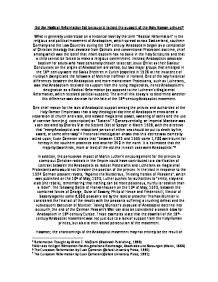 Did the Radical Reformation fail because it lacked the support of the Holy Roman princes?

Did the Radical Reformation fail because it lacked the support of the Holy Roman princes? What is generally understood on a historical level by the term "Radical Reformation" is the religious and political movement of Anabaptism, which spread across Switzerland, southern Germany and the Low Countries during the 16th century. Anabaptism began as a compilation of Christian theology that deviated from Catholic and conventional Protestant doctrine, chief among which was the belief that infant baptism has no basis in the Holy Scriptures and that a child cannot be forced to make a religious commitment. Instead, Anabaptists advocate baptism for adults who have personally chosen to accept Jesus Christ as their Saviour. Conclusions on the origins of Anabaptism are varied, but two major groups that emerged in the 16th century were the Swiss Brethren in Zurich (expelled in 1526 at the insistence of Huldrych Zwingli) and the followers of Melchior Hoffman in Holland. One of the key historical differences between the Anabaptists and more mainstream Protestants, such as Lutherans, was that Anabaptism received no support from the ruling magistrates, hence Anabaptism's designation as a Radical Reformation (as opposed to the Lutheran's Magisterial Reformation, which received political support). ...read more.

Taking M�ntzer's espousal of Anabaptist doctrine into account4, the end of the German Peasant's War can also be considered a severe blow for Anabaptism in 16th-century Europe. These examples state that the downfall of the 16th-century Anabaptist movement was not just due to a lack of support from the Holy Roman princes, but also to their active persecution of the movement. However, the shortcomings of the Anabaptist movement may not entirely be the result of state persecution; many of them could be connected to antagonism from the general populace of the Holy Roman Empire and even the fragility of the movement itself. At the same time as the Swiss Brethren found themselves expelled from Zurich, a number of Anabaptist sects centred around certain individuals sprang up in the cities of southern Germany, however these sectaries were also ultimately forced into exile; such was the case of the M�ntzerite scholar Johann Denck, who was expelled from the cities of Nuremberg, Strasbourg and Worms due to publicly preaching against infant baptism. With the lack of a central spiritual leader, the German Anabaptist movement was fated to become nothing more than "a hotchpotch of sects and wandering bands who had very little in common", according to RJ Tarr in 2001's History Review. ...read more.