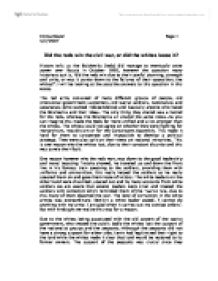 Did the reds win the civil war, or did the whites loose it?

Emma Dwyer Page 1 5/7/2007 Did the reds win the civil war, or did the whites loose it? History tells us the Bolsheviks (reds) did manage to eventually seize power over Russia in October 1920, however the question many historians ask is, 'did the reds win due to their careful planning, strength and unity, or was it purely down to the failures of their opposition, the whites?'. I will be looking at the possible answers to this question in this essay. The red army consisted of many different groups of people, old provisional government supporters, old tsarist soldiers, nationalists and separatists (who wanted independence) and basically anyone who hated the Bolsheviks and their ideas. The only thing they shared was a hatred for the reds, whereas the Bolsheviks all shared the same views. As you can imagine this made the Reds far more unified and a lot stronger than the whites. The whites could not agree on whether they were fighting for monarchism, republicism or for the Constituent Assembly. ...read more.

But with hindsight we realize this was for a reason. Due to the whites being associated with the old system of the tsarist government, who treated the public badly the whites lost the support of the nationalist groups and the peasants. Although the peasants did not have a strong support for either side, Lenin had legitimized their right to the land while the whites made it clear that land would be restored to its former owners. The support of the peasants was crucial since they supplied the main body of soldiers for both sides, so for the whites to loose their support was a large explanation for them eventually loosing the civil war. Another reason why the whites lost was because Denikin, one of the main white leaders did not see how valuable good propaganda was. The Bolsheviks however did, and used propaganda considerably well; they used imaginative and powerful images and played on the weaknesses of the whites that large majorities of the Russian population could identify with. ...read more.

The Bolsheviks obviously had the upper hand as the whites were scattered round the edges of this large area and found it hard to communicate with each other as they didn't have the up to date equipment the reds did. And even if they did often the white generals would not work together as they didn't trust each other or purely didn't like each other, many white generals were suspicious of Kolchak's motives and intentions. I believe this point shows how well organized the reds were in comparison to the whites and this is a good point to show why the reds beat them. I have tried to identify whether it was in fact the whites failures that made them loose the civil war or whether it was in fact purely down to the reds being an extremely good and well organized army. But I have found it impossible to pinpoint exactly which it was, as I believe it was down to many factors on both sides that led to the Bolsheviks gaining power, the geographical factors, unity and organization, leadership skills, and support all played a part into the Bolshevik victory of 1920. ...read more.