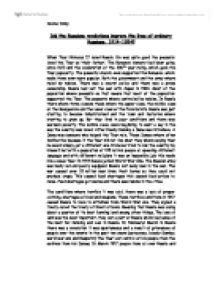 Did the Russians revolutions improve the lives of ordinary Russians, 1914-1924?

Did the Russians revolutions improve the lives of ordinary Russians, 1914-1924? When Tsar Nicholas II ruled Russia life was quite good the peasants loved the Tsar as 'their father'. The Romanov dynasty had been going since 1613 and the celebration of the 300th year ruling, which gave the Tsar popularity. The powerful church even supported the Romanov, which made them even more popular. Both the government and the army where ruled by nobles. There was a secret police and there was a press censorship. Russia had lost the war with Japan in 1904. Most of the population where peasants so that means that most of the population supported the Tsar. The peasants where controlled by nobles. In Russia there where three classes these where the upper class, the middle class or the Bourgeoisie and the lower class or the Proletariats. Russia was just starting to become industrialised and the town and factories where starting to grow up. But they lived in poor conditions and there was workers poverty. The middle class, were beginning to want a say in the way the country was ruled. ...read more.

There is then a second revolution in Russia in October/November the provisional Government was overthrown by the Bolsheviks led by Lenin. This was an organised revolution. Lenin set up a communist state before he died in 1924. Lenin got communist control of Russia between 1918 and 1924. Communist revolutionaries killed the royal family in 1918, who had caused all the trouble in Russia. Communist control gave Lenin state control of key industries, state control of banks, state control of railways, removal of grain from peasants by seizure or taxation and a new constitution creating the USSR. The Bolsheviks had taken control of Petrograd in November 1917 and it took three years for them to control the rest of Russia and only after a civil war. In the civil war Lenin led the red army, he was fighting against the white army who where a collection of the Tsars supporters. Some countries like Japan, France, Britain, USA and Czechoslovakia supported the white army. To help the red army Lenin's rule about all the peasants surplus grain being taken from them came into action. It feed the red army and made sure they did not go hungry Lenin cared more about his army than his people. ...read more.

Tsar Nicholas introduced a Duma, which did no good because if they did not agree with the Tsar then the Tsar would simply get a new one. Rich land owner owned much more land than anybody else and also there was a large gap between rich and poor. Some of Lenin was that no one was better than anybody else. The peasants where aloud as much land as the nobles. No one had to do more work than anybody else. Lenin withdrew them from World War One but then started a civil War, which killed many people. Lenin set up a Government, which could be elected into power. They did not win the election so Lenin called the whole thing off. I think that Russia was better under the control of neither of these men but I think that they where slightly better off under the control of Lenin because after the Civil War everything was fine. The peasants got to keep their grain and when the New Economic Policy was introduced the factories and small industries where handed back to their owners. No one was better than anyone else and everyone was aloud the same amount of land with the new land decree. Heather Bibby ...read more.