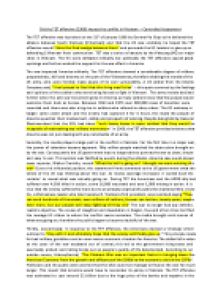 Did the TET offensive (1968) impact the conflict in Vietnam

﻿Did the TET offensive (1968) impact the conflict in Vietnam ? Controlled Assessment The TET offensive was launched on the 31st of January 1968 by General Vo Giap as he believed the alliance between South Vietnam (S.Vietnam) and that the US was unstable; he hoped the TET offensive would ?drive the final wedge between them? and persuade the US leaders to give up on defending S.Vietnam from communism. TET was a series of attacks by the Vietcong (VC) on major cities in Vietnam. The VC were defeated militarily but politically the TET offensive caused great uprisings and further eroded the support for the war effort in America. The war impacted America militarily. The TET offensive showed a considerable degree of military preparedness, skill and bravery on the part of the Vietnamese; therefore shaking the morale of the US army, who were forcibly made aware of its own vulnerability. A US soldier from the Charlie Company said; "I had prayed to God that this thing was fiction" ? this quote summed up the feelings and opinions of the soldiers who were being forced to fight in Vietnam. The army morale declined further when the anti-war movement grew in America as many soldiers knew that few people would welcome them back as heroes. Between 1963 and 1973 over 500,000 cases of desertion were recorded and there was also a big rise in soldiers who refused to obey orders. ...read more.

Politically, the TET offensive was testing the government. The Tet offensive showed that Westmoreland?s optimism was misplaced and that his assessment was wrong after assuring the American public that the war was going well and the communists were in retreat. Westmoreland requested more than 200,000 new troops in order to mount an effective counteroffensive, an escalation that many Americans saw as an act of desperation. As anti-war sentiment mounted on the home front, some of Johnson?s advisers that had supported past military build-up in Vietnam now argued for scaling back U.S involvement. Furthermore Johnson?s credibility collapsed ? his approval rating in 1963 was over 80% which then plummeted to under 40% in 1967. Stanley Karnow wrote: ?But then came the TET ? and his ratings fell ? as if Vietnam were a burning fuse that had suddenly ignited an explosion of dissent.? On the 31st of March, President Johnson declared that he was limiting the bombing of North Vietnam to a specific area and therefore sparing 90% of communist territory and calling for negotiations to end the war. At the same time, he announced that he would not be running for re-election that November ? ?I shall not seek, and I will not accept, the nomination of my party for another term as your President? Nixon was the successor of Johnson as he promised ?Peace with Honour? and to De-Americanise the war. ...read more.

The TET offensive caused a lack of direction andhad a detrimental effect on the Vietcong army; therefore the war effort and conflict slowly ground to a steady halt, and ultimately impacted the conflict in Vietnam. In conclusion, the boldness of the Communist offensive, the sensationalist reports from the media, and the heavy U.S. casualties incurred during the fighting, coupled with the disillusionment over earlier, overly optimistic reports of progress in the war by administration officials, accelerated the growing disenchantment with President Johnson's conduct of the war. However the impact of the Tet Offensive went beyond its military outcomes. The Tet offensive is seen as the great turning point: from then on the war, was widely acknowledged as unwinnable by the Americans. It was only a matter of time before mighty US imperialism was humiliatingly forced to withdraw. Not only did the TET offensive signal the strength of the opposition, but also the lies and large credibility gap brought on by the US government. The impacts of the TET offensive ranged widely from economic to social to military and political; all of which eroded the war effort in America and brought out its weaknesses. However, Vietnam suffered great consequences as well. When all the issues accumulated the speed of the war started to slow down, and gradually became de-Americanised. Therefore, it perhaps could be said that the TET offensive impacted the conflict in Vietnam and eventually was the reason it finally ceased. ...read more.