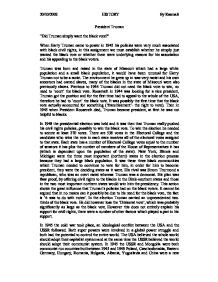 President Truman "Did Truman simply want the black vote?" When Harry Truman came to power in 1945 his policies were very much associated with black civil rights, in this assignment we must establish whether he simply just wanted the black vote or whether there were underlying reasons for his association and his appealing to the black voters. Truman was born and raised in the state of Missouri which had a large white population and a small black population, it would have been unusual for Harry Truman not to be a racist. The environment he grew up in was very racist and his own ancestors had owned slaves, many of the blacks in the state of Missouri were also previously slaves. Previous to 1944 Truman did not need the black vote to win, no need to 'court' the black vote. Roosevelt in 1944 was looking for a vice president, Truman got the position and for the first time had to appeal to the whole of the USA, therefore he had to 'court' the black vote. It was possibly the first time that the black vote actually accounted for something ('franchisement'- the right to vote). Then in 1945 when President Roosevelt died, Truman became president, at first he was not helpful to blacks. ...read more.

The USA believed the whole world should adopt their capitalist system and at the same time the USSR believed the world should adopt their communist system. In 1945 the USSR and Mongolia were both communist run countries but between 1945 and 1948 Poland, Czechoslovakia, Eastern Germany, Hungary, Romania, Bulgaria, Albania, Yugoslavia and China were a new list of countries that Russia had 'liberated' forced to become communist, in the global power struggle. Americans became terrified that the world would become communist and that they would be swamped. Americans did not want to be part of a communist country because it would mean all their wealth would have to be shared, industry would be state-owned not privately owned and elections would be a one-party dictatorship with all candidates belonging to the communist party. The Americans embarked upon a 'red witch hunt' an attack on all communist countries. Truman firmly believed that equality was vital in maintaining America's moral standing in the Cold War world. So Truman may have been eager to gain equality for all Americans, to stand tall against the USSR, in the global power struggle. Truman may have also been backing black civil rights for the sole reason to protect the Americans national reputation 'conscience', he believed that there should be an end to lynching, the poll tax and inequality in education and employment. ...read more.

The nation would lose pride in their justice system. However, privately Truman would still refer to blacks as 'niggers', his sister even claimed that 'Harry is no more for nigger equality than any of us'. This paints a different picture to how he was regarded by his public. The question being analysed has a very open ended answer, as it is quite possible that President Truman was motivated by the black vote, respect for the law, humane repugnance at racist attacks, personal veracity and his insight into what was good for his country at the time and its proclaimed leadership of the free world against communism, which veered Truman toward support of greater equality for blacks. However, ultimately he supported civil rights so strongly, it could be claimed that it was simply to win the black vote and as a result gain power of the country that he had been brought up in. the definitive reward, which he longed for, a famous name all around the world and a place in history. Still there remains to be strong enough evidence to prove that Truman's motivation was not purely political. Therefore Truman's association with black civil rights was not totally motivated by his want for the black vote but as a result of a combination of reasons. 20/10/2003 HISTORY By Rasmali ...read more.