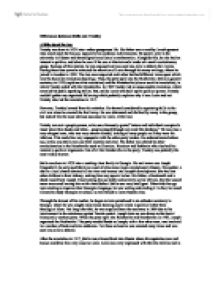 Differences between Stalin and Trotsky

Differences between Stalin and Trotsky A little about the two Trotsky was born in 1879 into a rather prosperous life. His father was a wealthy Jewish peasant who cared much for his son, especially his academic achievements. He spent a year in the university in Odessa and showed great excellence in mathematics. Alongside this, he also had an interest in politics, and when he was 18 he was a Marxist and a leader of a small revolutionary group. Because of this interest, he was exposed and was sent into exile in Siberia for 4 years. During these four years he attracted the attention of Lenin through his many writings, whom he joined in London in 1902. The two men respected each other but had different views upon which way the Socialist revolution should go. Thus, the party split into the Bolsheviks- Stalin as general secretary in 1922 (rapid socialist revolution) ...read more.

She had lost other children in their infancy, making him very special to her. His father, a blacksmith and a drunk would beat Joseph. Once beating him so badly and severely on his left arm, that the wound never recovered leaving him with a hard defect. Stalin was very intelligent. When kids his age were starting to improve their Georgian language, he was writing and reading it. In fact, he wasn't allowed to study Georgian at school, so was forced to learn Russian also. Through the devout of his mother, he began to train priesthood in an orthodox seminary in Georgia, where he was caught many times showing more interst in political rather then theological ideas. Not long after that, he was expelled from the seminary in 1899 due to his involvement in the resistance against Tsarist control. Joseph later on was drawn to the Social Democratic workers party. When the party split into Bolsheviks and Mensheviks in 1903, Joseph organised the Bolsheviks. ...read more.

They both believed in a Socialist Revolution. They were both good at editing newspapers and writing, and both showed abilities of oratory, Stalin more the Trostky. But what set them apart was that Trotsky was the more intellectual of the two and held more of the theories and speculations. This attracted him to Lenin very early on. Stalin on the other hand, cold connect with the proletariat class more as he himself was one and understood them better. Trotsky also had two other big disadvantages which proved quite serious in judging the power given after Lenin. First of all, He was very arrogant and narrow minded. Fellow members of the party disliked and distrusted him for this. Stalin was able to outmanoeuvre and outwit Trotsky when he joined sides with some members of the left to get rid of him. Secondly, Trotsky had a Jewish background, which didn't do him any favours in a country with a lot of anti-Semitism. Stalin was able to skilfully work with Trotsky's drawbacks and together with his own political genius laid the ground work for him becoming Dictator. Weber suppressed ...read more.