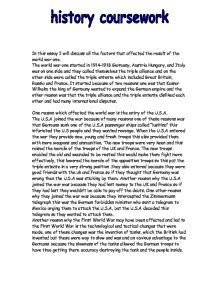 Discuss all the factors that affected the result of the world war one.

In this essay I will discuss all the factors that affected the result of the world war one. The world war one started in 1914-1918 Germany, Austria Hungary, and Italy was on one side and they called themselves the triple alliance and on the other side were called the triple entente which included Great Britain, Russia and France. It started because of two reasons one was that Kaiser Wilhelm the king of Germany wanted to expand the German empire and the other reason was that the triple alliance and the triple entente disliked each other and had many international disputes. One reason which affected the world war is the entry of the U.S.A. The U.S.A joined the war because of many reasons one of these reasons was that Germans sank one of the U.S.A passenger ships called "lusitina" this infuriated the U.S people and they wanted revenge. When the U.S.A entered the war they provide new, young and fresh troops this also provided them with more weapons and ammunition. The new troops were very keen and this raised the morale of the troops of the UK and France. ...read more.

.camouflage was another technological change and they used to protect there troops and guns also troops were given gas masks this protected them from the new invention of poison's gas bombs these burned ,blinded and slowly killed the victims over 4 to 5 weeks. Trench warfare played a great role in the world war. Firstly enemy trenches were bombarded by shells to weaken the enemies' resistance, and then the soldiers would then climb out of their trenches (going over the top) and advance towards the enemy across 'no mans land'. When running across no mans land they would have to overcome many obstacles which were barbed wire, shell holes mud water and corpses. As the troops advanced no mans land they were often easy targets for the enemies deadly machine gunfire. Even when the enemy trench was captured they were not enough men to hold it. Position of the troops in the trenches moved little in 4 years and neither side appeared to win war by direct attack in order to end the stalemate the each side tried to wear the enemy down as much as possible and the battle of Somme made it clear that neither side would win a breakthrough in this new kind of war. ...read more.

The Germans had to go to restaurants to get there potato peelings (for a vaned diet) they also killed 2/3 pigs this was one of the main downfalls as they had no pigs had the end of the war. Soldiers were began to steel food because they had little supplies, stretched and under a lot pressure and soldiers became worried about home ,families added to the discontent because refused to fight because they knew that they had lost the war and that it was over so they didn't want to risk there lives. All this led to Kaiser leaving Germany and went to Holland this caused a lot of chaos in Germany because lots of different people tried to run. In conclusion I thought the main reason which led to the First World War came to an end was the entry of the U.S.A because this lowered the opposition's morale and raised the allied morale, it also gave the injured and tired soldiers to have a rest and it brought in young fit soldiers. Another reason was the technological and tactical changes this made the war a lot easier and without the technological changes the war would have lasted a lot longer than it did. ...read more.