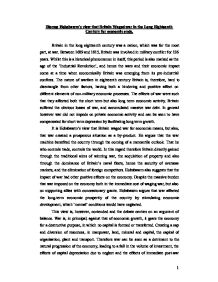 Discuss Hobsbawm's view that Britain Waged war in the Long Eighteenth Century for economic ends. Britain in the long eighteenth century was a nation, which was for the most part, at war. Between 1689 and 1815, Britain was involved in military conflict for 126 years. Whilst this is a historical phenomenon in itself, this period is also marked as the age of the 'Industrial Revolution', and hence the wars and their economic impact come at a time when economically Britain was emerging from its pre-industrial confines. The nature of warfare in eighteenth century Britain is, therefore, hard to disentangle from other factors, having both a hindering and positive affect on different elements of non-military economic processes. The effects of war were such that they affected both the short term but also long term economic activity. Britain suffered the obvious losses of war, and accumulated massive war debt. In general however war did not impede on private economic activity and can be seen to have compensated for short term depression by facilitating long term growth. It is Hobsbawm's view that Britain waged war for economic means, but also, that war created a prosperous situation as a by-product. He argues that the war machine benefited the country through the coming of a mercantile outlook. That he who controls trade, controls the world. In this regard therefore Britain directly gained through the traditional aims of winning war, the acquisition of property and also through the dominance of Britain's naval fleets, hence the security of overseas markets, and the elimination of foreign competitors. ...read more.

Far more than aiding the economy, this debt has been accredited with accounting for slow growth during the industrial revolution. It has been argued by Williamson that 'the war debt crowded out civilian accumulation, inhibited growth and contributed to the dismal performance in the workers' standard of living'1. He goes on to imply that economically Britain would have been better off without the effects of war, 'Britain tried to do two things at once - industrialise and fight expensive wars, and she simply did not have the resources to do both'2. There is much debate over whether or not 'crowding out' ever came into play as it assumes certain conditions, mainly that of full employment, that without war, the workforce used for military ends would be otherwise employed in a productive capacity in the economy. Under war conditions there would thus be an increase in the difference of the amount of resources used for government means and those released through tax and inflation. The surplus then would have to come from investment and therefore at the expense of the non-military economy. Whilst this argument has taken much credit in explaining the slow growth of the British economy until after 1820, when the effects of war could no longer be felt, it is somewhat of generalisation of events. Firstly it is unlikely that Britain was ever running at full employment, British agriculture proved adept at remaining self-sufficient with a lower workforce than the European average, meaning that vast numbers of men were available to labour for the new industries the 'Industrial Revolution' had created for the economy. ...read more.

there can be little doubt that this factor of naval power increased the carrying trade of England'3. Trade ultimately was what made Britain great, the fact that the military might of the country helped safeguard markets and win trading rights cannot be overlooked in importance. War did create slow growth in the economy throughout the industrial revolution, whilst it may not have led to crowding out, its economic effects must have been felt. The high levels of taxation in Britain obviously reduced the wealth of its population, taking money away from capital and reducing demand. Whilst these affected the short term, however, in the long run war and taxation may have been what made Britain great. The 'fiscal-military state was not necessarily harmful to industry, for wars extended markets...and the national debt...(and) public borrowing created a range of securities which gave merchants, banks and trading companies a more varied and flexible outlet for funds'4. There was no sector, other than government, whose bonds could be used for the same purpose, the short term impact of war on the economy can therefore be justified as the creation of a financial centre in London, which the absence of would have held up industrialisation and English financial development. 1 Williamson W. G 'why was British growth so slow during the Industrial Revolution' 2 Williamson W.G 'Why was British Growth so slow during the Industrial Revolution' 3 John A.H - 'War and the English Economy 1700 - 1763' 4 Daunton MJ - progress & poverty 1 ...read more.