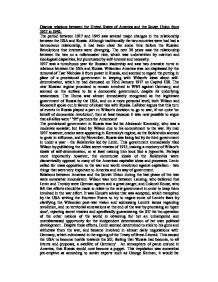 Discuss relations between the United States of America and the Soviet Union from 1917 to 1945.

Discuss relations between the United States of America and the Soviet Union from 1917 to 1945. The period between 1917 and 1945 saw several major changes in the relationship between the USA and Russia. Although traditionally the two countries were had had a harmonious relationship, it had been clear for some time before the Russian Revolutions that interests were diverging. The next 28 years saw the relationship between the two on a rollercoaster ride, which was underwritten by mistrust and ideological disparities, but punctuated by self-interest and necessity. 1917 was a tumultuous year for Russian leadership and saw two dramatic turns in relations between the USA and Russia. Wilsonian America was not displeased by the removal of Tsar Nicholas ii from power in Russia, and seemed to regard the putting in place of a provisional government in keeping with Wilson's ideas about self-determination, which he had discussed on 22nd January 1917 on Capitol Hill. The new Russian regime promised to remain involved in WWI against Germany, and seemed on the surface to be a democratic government, despite its underlying weaknesses. The Duma was almost immediately recognised as the legitimate government of Russia by the USA, and on a more personal level, both Wilson and Roosevelt spoke out in favour of closer ties with Russia. LaFeber argues that this turn of events in Russia played a part in Wilson's decision to go to war, if not quite ...read more.

The economic relationship that had grown up between the two countries, and the fact that the USA was the only major country not to have recognised the SU resulted in pressure on the USA to formally recognise the Bolshevik government. In 1931 the Manchurian crisis led many to see the problems that could occur. Although the USA and SU had a common aim, they were unable to collaborate in any concerted action, as, officially, the USA refused to believe that the SU existed! In the event, it was the growing power of Germany and Japan that led to recognition. It seemed necessary that they should pursue the common aim of keeping these two threats under control, and thus they engaged in the Roosevelt-Litvinov agreements. Despite the promise of better relations that these talks seemed to afford, it quickly transpired that each side had misunderstood the others intentions, and in reality, neither side was happy with the others terms. By 1934 it was generally accepted that 'the honeymoon atmosphere has evaporated completely' . Gaddis argues that both sides expected too much form recognition. Russia had expected the relationship to help counter-balance the growth of Germany and Japan, while in reality, at this stage Roosevelt was more concerned with Comintern activities, and The USA had expected the behaviour of the SU to change in order to become more acceptable to the USA, which was never an option to Stalin. ...read more.

Two days before Russia was due to join the war against Japan, the USA dropped an atomic bomb on Hiroshima, thus ending the war very swiftly. The USA saw the bomb as having the side effect of evening out their position with the SU, and giving them a stronger bargaining position, but there was an underestimation of just how great the mutual mistrust was. Russia was disturbed by the strength of the weapon, and saw it a s a threat, and we can certainly say that in terms of the next few decades, the existence of nuclear capability shaped almost every aspect of USA/SU relations. The most common question asked by historians in the study of this period is 'Can we say from this that the Cold War was inevitable?' I feel that while inevitable is too strong a word, we can certainly see the seeds of the Cold war being sowed in this period. The behaviour of the two countries during this period is echoed and exaggerated in the years to come, but most is already in place by 1945. Ideological conflict, lack of communication, mistrust, fear and inconsistency punctuated the cold war, and all of these things can be seen in the period discussed here. It seems that the Cold war was simply an escalation of such feelings and events, rather than something new that emerged from them. ...read more.