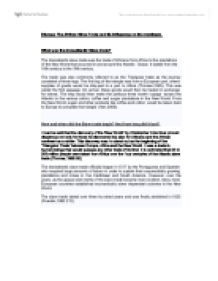 Discuss The African Slave Trade and its influences on the continent. What was the transatlantic Slave trade?

Discuss The African Slave Trade and its influences on the continent. What was the transatlantic Slave trade? The transatlantic slave trade was the trade of Africans from Africa to the plantations of the New World that occurred in and around the Atlantic Ocean. It lasted from the 16th century to the 19th century. The trade was also commonly referred to as the Triangular trade as the journey consisted of three legs. The first leg of the triangle was from a European port, where supplies of goods would be shipped to a port in Africa (Thomas,1999). This was called the first passage. On arrival, these goods would then be traded in exchange for slaves. The ship would then make the perilous three month voyage across the Atlantic to the various cotton, coffee and sugar plantations in the New World. From the New World, sugar and other products like coffee and cotton would be taken back to Europe to complete the triangle (Hat, 2006). How and when did the Slave trade begin? And how long did it last? It can be said that the discovery of the 'New World' by Christopher Columbus proved disastrous not only for those he discovered but also for Africans and the African continent as a whole. This discovery was to stand out as the beginning of the 'Triangular Trade' between Europe, Africa and the New World. ...read more.

It is not extraordinary, if on this occasion he yields to the temptation with little firmness, and accepts the price of his fellow creatures liberty with as little reluctance, as the enlightened merchant. Accordingly, he falls upon his neighbours, and a desperate battle ensues... if he prevails, and takes prisoners, he gratifies his avarice by selling them. (Obadina, 2000). Before long, there was a high rise in the commercial slave trade due to the needs of European traders setting out for the New World. Enslaving ones enemy became more of a reason to go to war rather than a consequence of war (Dresser, 2003). African kings began 'dealing in people' for foreign goods such as guns, iron, cloth and tobacco, alcohol and cowie shells which was the main currency in West Africa at the time. In 1770 Ottobah Cugoano was kindnapped in Ajumako which is in modern-day Ghana. He was 13 years old. With reference to his own capture he wrote the following after regaining his freedom: I must own, to the shame of my own countrymen, that I was first kidnapped and betrayed by some of my own complexion, who were the first cause of my exile and slavery...If there were no buyers there would be no sellers.(Obadina, 2000). It may also be thought-provoking to add that if there were not any sellers, surely there would not have been any buyers. ...read more.

which would be used to trade for slaves. 2) The red route was commonly known as the 'Middle passage' and it involved the transportation of slaves from the African continent to the 'New World'. Slaves were introduced to new diseases and suffered from malnutrition long before they reached the new world. It is suggested that the majority of deaths on the voyage across the Atlantic - the middle passage - occurred during the first couple of weeks and were as a result of malnutrition and disease encountered during the forced marches and subsequent interment at slave camps on the coast. 3) The Green route symbolized the completion of the Triangular trade and the ships would often return laden with all sorts of luxurious goods that were somewhat lacking in Europe, such as coffee, sugar, cocoa, cotton and tea. How many slaves made the perilous journey across the Atlantic? It has been estimated that between 1520 and 1870, over thirty million Africans voyaged across the Atlantic to become slaves (Thomas, 1997). Most of these voyages went to Latin America and the Caribbean. The institution of slavery really only took hold in the English colonies that eventually became the United States after the founding of Jamestown. Illustration showing the capture and forced removal of slaves from Africa. Slave owners branding slaves, this was the main mechanism used to show ownership of slaves. Image showing the structure of a slave ship, up to 600 slaves could be crammed onto these ships. ...read more.