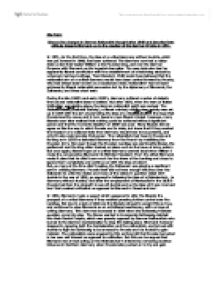 Discuss the changes in German Nationalist thought after 1848 and describe their attitude towards Bismarck up to the creation of the German Empire in 1871.

Z�e Terry Discuss the changes in German Nationalist thought after 1848 and describe their attitude towards Bismarck up to the creation of the German Empire in 1871. In 1871, for the first time, the idea of a united Germany without Austria, which was put forward in 1848, had been achieved. The Germans now had a nation state under their leader William I, the Prussian king, and now the German Emperor with Bismarck as his imperial chancellor. The new state also had 'an apparently liberal constitution with the establishment of a Reichstag elected by universal manhood suffrage.' Few liberals in 1948 would have believed that the nationalist aim of a unified Germany would have been carried forward by Prussia, who had always been known as a reactionary state. Nationalism had not been achieved by liberal nationalist persuasion but by the diplomacy of Bismarck, the Zollverein, and three short wars. During the late 1840's and early 1850's, Germany suffered a series of defeats that caused nationalist ideas to deflate. But after 1859, when the wars of Italian Unification were taking place, the German nationalist spirit was revived. The Nationalverein, (National Society), a liberal minded, middle class society was set up in 1859 with the aim of promoting the idea of a Kleindeutsch, in the hope that Prussia lead the cause and in turn become more liberal minded. ...read more.

But due to a lack of distrust, the liberals refused to accept this as true, and continued to view Bismarck as an anti-liberal reactionary, with no hope of uniting Germany. This view was increased in 1864 when the Schleswig-Holstein question came into play. The Danes wanted to incorporate Schleswig-Holstein into their Danish Empire, which was gravely opposed by German Nationalists who turned to the German Confederation to stop this taking place. Bismarck however stepped in, ignoring both the Confederation and the nationalists, and joined with Austria to fight for Schleswig to be annexed to Prussia and for Austria to gain Holstein. The nationalists were angered by this as they felt that Prussia had acted in her own self interest as opposed to unification. But this can be argued that Bismarck was in fact acting on the Kleindeutsch's interest by removing Austrian influence in Northern Germany when Prussia later pushed on to try and gain Holstein from Austria, which led to war. In an attempt to gain support, Bismarck once again called upon the nationalists for support, which again fell on deaf ears. Bismarck managed to win the war against Austria which caused a sudden turn about in the nationalist attitude towards him. ...read more.

Prussia did not get to put their candidate on the throne due to interference from France, and it didn't cause the war that Bismarck had hoped for until France started making demands on the Prussian King, which he refused. This gave Bismarck the chance he needed to provoke Prussia. Bismarck managed to provoke France to declare war through exploitation of a meeting between the King of Prussia and the French Ambassador. This drove German nationalists into an anti-French frenzy and encouraged the romantic ideals of 1848 to reappear. Germany won the war which again, encouraged by Bismarck, sent the country into a patriotic fervour which was also encouraged by nationalist media. Unification seemed certain. Bismarck later negotiated with the Southern states who reluctantly agreed to let Prussia dominate Germany, but still give recognition to the Southern monarchies. Bismarck has no choice but to take nationalism into account when dealing with the unification of Germany and hence the German Empire was in consistency with the ideas of nationalists even though the constitution wasn't a liberal as some of the nationalists would have liked. "A German Empire emerged in 1871 and not simply a Greater Prussia; it was a sense of Germanness that gave it its identity. Nationalism gave Bismarck's ambitions for Prussia a sense of moral legitimacy." ...read more.