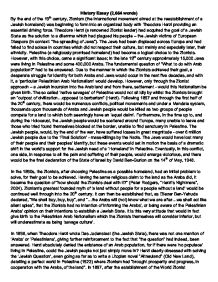 Discuss the course and consequences of the Arab Israeli Conflict

History Essay (2,664 words) By the end of the 19th century, Zionism (the international movement aimed at the reestablishment of a Jewish homeland) was beginning to form into an organized body with Theodore Herzl providing an essential driving force. Theodore Herzl (a renowned Zionist leader) had acquired the goal of a Jewish State as the solution to a dilemma which had plagued his people - the Jewish victims of European Diaspora (in context: "the spreading of Jews"). The Jews had been displaced across Europe and had failed to find solace in countries which did not respect their culture, but mainly and especially later, their ethnicity. Palestine (a religiously promised homeland) had become a logical choice to the Zionists. However, with this choice, came a significant issue; in the late 19th century approximately 15,000 Jews were living in Palestine and some 400,000 Arabs. The fundamental question of "What to do with Arab population?" had to be answered. Due to the manner in which the Zionists achieved their goal, a desperate struggle for identity for both Arabs and Jews would occur in the next five decades, and with it, a 'particular Palestinian Arab Nationalism' would develop. However, only through the Zionist approach - a Jewish incursion into the Arab land and from there, settlement - would this Nationalism be given birth. The so called 'native savages' of Palestine would not sit idly by whilst the Zionists brought an "outpost of civilization...opposed to barbarism" (Herzl). Following 1897 and through the first half of the 20th century, there would be numerous conflicts, political movements and under a Mandate system, thousands ...read more.

For all of this effort, the British did not see a strategic advantage in handing Palestine to the Jews, as they could just the same give it to the Arabs. Thus, the British would not agree to assist the Jews for another two years. From July 14th 1915, to January 30 1916, the Hussein-McMahon correspondence between the Sharif of Mecca, Husayn bin Ali and Sir Henry McMahon occurred. This correspondence sought to have the British support the Arabs in the area of the Ottoman Empire in keeping their independence should they assist in destabilizing Turkey during WWI. The letter on 24th October 1915 is a substantially important contributor to later 'anti-British' sentiment of Arabs. The letter outlined that, "...Great Britain is prepared to recognize and uphold the independence of the Arabs in all the regions lying within the frontiers proposed by the Sharif of Mecca." This would later be undermined by the 'secret' Sykes-Picot agreement which would contradict the promise. The Sykes-Picot agreement would involve Britain, France and Russia, and the partition of the Ottoman Empire would be agreed upon. For the Palestinian case, Britain was allocated control of areas roughly comprising today's Jordan, southern Iraq, and a small area around Haifa. This abrogation of the Hussein-McMahon agreement would see the British gain substantial opposition from the Arabs. The 12th of November, 1917, ushered in the Balfour Declaration, the result of consistent lobbying by Chaim Weizmann (future first president of Israel). Britain expressed in the Balfour Declaration, "views in favour of the establishment in Palestine of a national home for the Jewish people...best endeavours to facilitate the ...read more.

Reflecting on the incidents in December, 1933, Khalil al-Sakakini stated that, "Whoever investigates the rebellions in Palestine during the English period will see them as an ongoing development". This statement could not be further from the truth. It would, of course, be quite narrow-minded to say that the protests 'involved everyone' from the beginning. It started with, as Palestinian Khalil al-Sakakini perceived, "locals in Jerusalem, the second broader and limited to a few cities and eventually encompassed all cities". The conflict - demonstrations and violence (terrorism included) - had eventually involved all Palestinian Nationalist Arabs who were in fear of becoming a majority ruled by a minority (where Palestine would be a Jewish-ruled State). The incidents in 1933 can then be seen as "a single-chain of events" (Khalil al-Sakakini, 1933), which he believed also developed a message - placing emphasis on the goal of the demonstrations; "The entire world will see that the Arab nation is not easy prey". The demonstrations themselves, of course, can be seen as a direct response to the British Mandate and policies at the time - the Zionists having the British perceptually on their side (or at least, in the Arab's eyes). That being said, past 'betrayals' and disapproval of the Mandate system had left an accumulation of ill-felt loyalty to the British control which had then been fueled by further Jewish 'oppression' and incursion upon the Arab land. This had culminated to a single, focal point of unrest; a very unrest that the Arab nationalist movement would soon evoke upon their 'oppressors' in the years to come. ?? ?? ?? ?? ...read more.