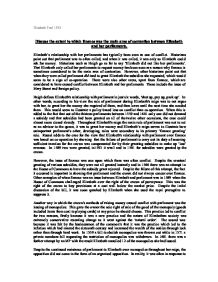 Discuss the extent to which finance was the main area of contention between Elizabethand her parliaments.

Elizabeth Ford 13R3 Discuss the extent to which finance was the main area of contention between Elizabeth and her parliaments. Elizabeth's relationship with her parliaments has typically been seen as one of conflict. Historians point out that parliament was to often called, and when it was called, it was only so Elizabeth could ask for money. Historians such as Haigh go as far to say 'Elizabeth did not like her parliaments'. That Elizabeth only called her parliaments to request money has been seen as a reason why finance is sometimes considered to be the main area of contention. However, other historians point out that when they were called parliament did tend to grant Elizabeth the subsidies she requested, which would seem to be a sign of co-operation. There were also other areas, apart from finance, which are considered to have caused conflict between Elizabeth and her parliaments. These include the issue of Mary Stuart and foreign policy. Haigh defines Elizabeth's relationship with parliament in just six words, 'shut up, pay up, pack up'. In other words, according to his view the role of parliament during Elizabeth's reign was to not argue with her, to grant her the money she required of them, and then leave until the next time she needed them. ...read more.

In 1559 a bill to abolish monopolies was thrown out while in 1571 a private members bill requesting the restriction of monopolies was withdrawn. In 1601 there was a further attempt by an MP with the result Elizabeth annulled 12 of the monopolies she had issued. Despite the continued resistance of parliament to Elizabeth over monopolies throughout her reign, the opposition did not come in the form of an organised opposition. In reality, it was often in response to particular events and many of the motions asking for restrictions to be placed upon the monarchy was private members bills. The question of the extent to which there was conflict can only be properly addressed when the word 'conflict' is defined. JE Neale uses it to mean the times when parliament opposed Elizabeth acting as stones in the works of personal government. this may be because it was Neale who put forward the view that the civil war of the 17th century had its roots in the relationship between the crown and parliament in the 16th century. In contrast to this, Graves and Elton believe that the conflict was not and example of a poor relationship between the crown and parliament, but a relationship which was functioning as it should whereby parliamentary conflict was actually an act of legitimate scrutiny. ...read more.

An example of this would be in 1589 when a double subsidy was granted to help in the war against Spain. However, there were occasions when there was disagreement between Elizabeth and Parliament. She was pressurised into many decisions that, left to her own devices, she would not have made. It was only when Cecil threatened to resign that Elizabeth finally sent financial and military aid to the Scots. It was only under pressure form Dudley and Throckmorton that she sent financial aid to the Huguenots in France during the Wars of Religion. While it is clear that the relationship between Elizabeth and her parliament was normally one of co-operation where foreign policy was concerned, there were occasions when large areas of disagreement occurred, normally when it involved interference in foreign religion. Finance was undoubtedly and issue upon which there was disagreement between Elizabeth and her Parliaments, however, its role as an area of contention has been exaggerated and historians has missed other areas of policy making which also caused conflict. Given the continual granting of subsidies to Elizabeth, it is difficult to consider Parliament as being the main issue of contention. Other issues, such as the succession and Mary Stuart, seem to have promoted a much greater degree of conflict. ...read more.