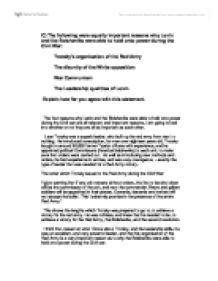 Discuss the following reasons why Lenin and the Bolsheviks were able to hold onto power during the Civil War.

They portrayed themselves as the defenders of the normal Russian people from foreign invaders, while the Whites were being used by capitalist powers. So even what could have been an advantage for the White Army turned out to be a help to the Reds. Whilst Lenin had helped a lot during the time when the Bolsheviks were trying to gain power and support, I do not think that his role was as much of a success during the Civil war. Lenin's job was now to run the government, organising food and industrial production. This was not an easy job. there had been food riots, and industry was collapsing as starving workers left the cities. But it was still crucial to keep the Red Army well supplied. To achieve this, Lenin introduced the policy of 'War Communism'. In towns the state took control of industry, the factories were told what to produce. Lenin put in his own managers, who imposed strict discipline on the workers. Food was rationed but only those working could get ration cards, and factory workers and soldiers were given larger rations, this was a good strategy by Lenin, as it encouraged people to join the Red Army, or work in factories to help keep the army well supplied. ...read more.