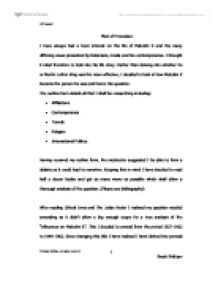 Discuss the influences on Malcolm X and how they helped form his ideology in the years 1949 to 1965?

Plan of Procedure I have always had a keen interest on the life of Malcolm X and the many differing views presented by historians, media and his contemporaries. I thought it ideal therefore to look into his life story. Rather than delving into whether he or Martin Luther King was the more effective, I decided to look at how Malcolm X became the person he was and hence the question. The outline form details all that I shall be researching including: * Affiliations * Contemporaries * Travels * Religion * International Politics Having received my outline form, the moderator suggested I be able to form a debate as it could lead to narrative. Keeping this in mind I have decided to read half a dozen books and get as many views as possible which shall allow a thorough analysis of the question. (Please see bibliography) After reading Critical Lives and The Judas Factor I realised my question needed amending as it didn't allow a big enough scope for a true analysis of the "influences on Malcolm X". This I decided to amend from the period 1957-1965 to 1949-1965. Since changing this title I have realised I have delved into periods before this, but I decided this was only to provide an all round picture to the reader so it didn't warrant another change to the question. My complete essay numbers 3697 (not including plan and bibliography), I understand I have exceeded the word limit slightly but after a thorough revision of the essay this couldn't be helped without affecting the analysis of the question. All relevant views have been included as well as sources with their evaluation and analysis. The essay has been a challenge to compose but worthwhile as it has opened my views on Malcolm X and how narrow, general views on him are, out of misunderstanding. I feel I have answered the question with some difficulty. ...read more.

York for his inauguration into the U.N, Malcolm X met with him and the media was to accuse the NOI of having ties to communism to discredit it. Malcolm played down the accusation and confirmed his ideology "the NOI is allied with Allah in whom we believe; hence we cannot be affiliated with communism since it's atheistic."16 This source corroborates that by 1961 Malcolm's ideology was still in line with the NOI with sustaining independent social, religious and economic programs (independent from secular ideologies). It could be argued that he only wanted to avoid government investigation, hence the statement, but that is unlikely as he was fully aware of the infiltration of FBI agents within the NOI. Malcolm's views were publicised by the media in the early sixties. After a speech at Harvard University in 1961 he espoused on the idea of a separate state for African Americans as a solution to the ongoing race problem and the likelihood of Armageddon.17 With Malcolm being more outspoken with NOI rhetoric, Elijah Muhammad felt the need for subtlety and so reprimanded Malcolm. Although in public the two men displayed unanimity in ideology behind the scenes a split was developing. A split that would change the already evolving Black Nationalist ideology of Malcolm X. As popularity18 gripped Malcolm he came into contact with varying organisations with different methods of attaining the same goal of emancipation for the African Americans. These struggles were at odds with NOI's ideology and also were disapproved of by the 'divine' messenger. Change in Direction The early sixties saw mass protests, headed by civil rights movements, in the form of marches, boycotts, sit-ins all known as 'direct action' campaigns. The NOI was an apolitical ideology and with the continued political events that were gripping the country Malcolm felt dissatisfied with the lack of action by the NOI. The absence of collaboration with the civil rights struggle he believed was isolating the NOI, which could have brought great advantages to the organisation. ...read more.

as the head of the African section of Cairo's foreign ministry.33 In the eyes of the American Intelligence the worst was to come when Malcolm was invited to the Bandung Conference scheduled for March 1965.34 This indicates his alliances with specific ideologues. It is clear Malcolm's influences were now from the left of the political spectrum. These included many Marxists, Socialists and Islamists. Black Nationalism was Malcolm's ideology until mid-1964 when he started to reappraise his direction. His obligation was an international one not confined now to the American frontiers. He was against colonialism in all its forms. George Breitman a white Trotskyite believed that Malcolm, by February 1965, was a Black Nationalist plus a Socialist and may well have eventually accepted Marxism as the liberating ideology, just as Castro had done.35 Dyson questions Breitman's perspective on the Black Nationalism/Socialism synthesis since Malcolm had distanced himself from the Black Nationalism term "...I haven't been using the expression for several months."36 This seems plausible but Black Nationalism cannot be wholly excluded from his ideology since many aspects he found agreeable. Breitman's prediction of the possibility of Malcolm accepting Marxism seems overstated. Malcolm was a deeply religious Muslim and accepting Marxism in its entirety seems contradictory. It's something that may never be known. On the 21st of February 1965, Malcolm X was assassinated. Conclusion Malcolm living his tumultuous life had gone through religions and ideologies. In his youth he turned from Christian to Atheist to Muslim. He had been exposed to many ideologies spanning the spectrum. He is remembered as a Black Nationalist simply because of his association to the NOI. His ideology though in reality was still in transit and was prevented from completion with his 'untimely' death. To isolate a specific ideology only raises more questions than answers. The influences on Malcolm and how they helped form his "ideology" are clear. Malcolm X was flexible and was willing to attain freedom for his people by "any means necessary."37 (c) Saqub Siddique. All rights reserved. ...read more.