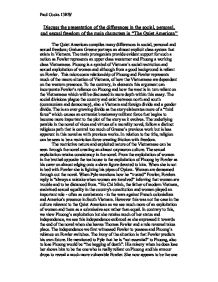 Discuss the presentation of the differences in the social, personal, and sexual freedom of the main characters in &quot;The Quiet American&quot;

Discuss the presentation of the differences in the social, personal, and sexual freedom of the main characters in "The Quiet American" The Quiet American compiles many differences in social, personal and sexual freedom; Graham Greene portrays an almost explicit class system that exists in Vietnam. The main protagonists provide evident support for such a notion as Fowler represents an upper class westerner and Phuong a working class Vietnamese. Phuong is a symbol of Vietnam's social restriction and sexual exploitation of women and although from a good background is reliant on Fowler. This microcosm relationship of Phuong and Fowler represents much of the macro situation of Vietnam, of how the Vietnamese are dependent on the western presence. To the contrary, in elements this argument can incorporate Fowler's reliance on Phuong and how the west is in turn reliant on the Vietnamese which will be discussed in more depth within this essay. The social divisions plague the country and exist between north and south (communism and democracy), also a Vietnam and foreign divide and a gender divide. The is an ever growing divide as the story elaborates more of a "third force" which causes an extremist breakaway militant force that begins to become more important to the plot of the story as it evolves. The underlying parable in the novel of vices and virtues of a morality novel, follow a distinct religious path that is central too much of Greene's previous work but is less apparent in this novel as with previous works. ...read more.

The bloody murder at the end combines to support this culture. The government before was no different being a totalitarian leadership style. The Vietnamese are the only who could have pursued such a grim defensive fight for so long without a deep underlying yearning for freedom because of there previous government. Fowler and Phuong symbolise the western and Vietnamese relationship as Fowler is demanding or at least controlling at times over Phuong as she initially plays a stereotypical Vietnamese partner. She bowls down to this domineering way of Fowler as she is feeble Vietnamese girlfriend. This oppression that exists But we later find out, she's not as feeble as she seems when she leaves Fowler and we see Fowlers independence and pride dented and broken as he is now reliant on Phuong emotionally and physically. Phuong's independence and expression of sexual, social and personal freedom she was previously restricted to with Fowler can also be compared to how socially the Vietnamese want to abandon western control to adopt a more traditional culture run by the Vietnamese them selves instead of foreign influence. The obvious personal freedom which dominates the novel is that of Fowler. This has been criticised because all the other characters receive little depth and explanation, John Lehman of the New Republic newspaper (1955), an original reviewer of the book when it was published described the characters as plain to the reader as "two dimensional cardboard". He went on to state that their purpose in the novel was of "little or no reality outside their function in the narrative". ...read more.

Social freedom is again evident through the character of Phuong as Fowler's character is dominating and controlling of Phuong, mainly because of his fear of loosing her. The social freedom of the general population is limited from the totalitarian leadership that existed from government them by the military forces in place of government followed a similar style of leadership. This fuelled the Vietnamese people, to rebel from the oppression that existed to obtain freedom eventually. Personal freedom is most evidently expressed in the case of Fowler's personal freedom. This is where we most see the underlying parable of religions Vices and moral. His Roman Catholic wife is not allowing him to divorce. The domino effect of this is that he has no freedom to re-marry and Phuong wishes him to marry her so she feels more secure in a world of insecurity and little hope. So this reduces his relationship chances and possibilities. His personal freedom is not only due to this marriage problem but his own internal battle for perhaps more freedom from his naivety and personality. He self contains and doesn't get involved which restricts his freedom. Nothing is more effective in Greene's bid to express his dark nature than when Fowler casually comments on the film he sees just before Pyle's murder: "it was what they call a film for boys, but the sight of Oedipus emerging with his bleeding eyeballs from the palace at Thebes would surely give better training for life today" Paul Cocks 13RW ...read more.