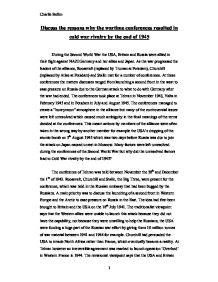 Discuss the reasons why the wartime conferences resulted in cold war rivalry by the end of 1945.

Discuss the reasons why the wartime conferences resulted in cold war rivalry by the end of 1945 During the Second World War the USA, Britain and Russia were allied in their fight against NAZI Germany and her allies and Japan. As the war progressed the leaders of the alliance, Roosevelt (replaced by Truman at Potsdam), Churchill (replaced by Atlee at Potsdam) and Stalin met for a number of conferences. At these conferences the matters discusses ranged from launching a second front in the west to ease pressure on Russia due to the German attack to what to do with Germany after the war had ended. The conferences took place at Tehran in November 1943, Yalta in February 1945 and in Potsdam in July and August 1945. The conferences managed to create a "honeymoon" atmosphere in the alliance but many of the controversial issues were left unresolved which caused much ambiguity in the final meanings of the terms decided at the conferences. This meant actions by members of the alliance were often taken in the wrong way by another member for example the USA's dropping of the atomic bomb on 5th August 1945 which was two days before Russia was due to join the attack on Japan caused unrest in Moscow. Many factors were left unresolved during the conferences of the Second World War but why did the unresolved factors lead to Cold War rivalry by the end of 1945? The conference of Tehran was held between November the 28th and December the 1St of 1943. Roosevelt, Churchill and Stalin, the Big Three, were present for the conference, which was held in the Russian embassy that had been bugged by the Russians. ...read more.

The idea was accepted but on conditions that some British colonies and Russian republics gained membership as well. The UN was not accepted straight away by the Churchill and Stalin and after much explanation from Edward R. Stettinius, the US Secretary of State, they agreed. Roosevelt had come to the conference with two main aims and had achieved them both even in his poor health. These were the successes of the Yalta conference, however there were many other issues that had to be discussed. The issue of what must happen to Germany was strong fro Stalin especially. He wanted a total of $20 billion in reparations from Germany, which half should go to Russia. However the British and the USA were not forthcoming because they believed that Germany was a useful trading partner and did not want to damage her economy even more. The revisionists say this was just the Westerners trying to limit the amount Russia received because they wanted to see her struggle and the USA especially didn't want a rival to her booming economy which might have arisen if Russia had received the full amount of reparations she had asked for. However the final reparations figure was not decided but instead was to be put in front of the reparations commission in Moscow. After the discussions the USA were inclined to give the Russians what they wanted in terms of reparations because it would be a useful bargaining tool for Washington in future discussions. The discussions of Germany were not just about reparations however but also about the break up of the land. Stalin recalled at the first Political Plenary Session on the 5th February what had been agreed but not finalised at Tehran and stated that he believed this was the right step for the post war Germany. ...read more.

If issues such as Poland were sorted out when they were first discussed at Tehran then the later conferences would have been a lot smoother due to the lighter workload. Although they all had their slight successes they predominantly failed because of the lack of action taken towards any issue that was remotely controversial. The period was very deceitful and each side were trying to catch each other out even though they were meant to be allies and were fighting the same cause. The problem was their opposite ideologies. They made it impossible for the two sides to see directly eye to eye hence the lack of conviction when it came to making decisions. If decisions had been made then relations could have run more smoothly after the war because no issues would have been so ambiguous. If the conferences went well then things like the dropping of the Atomic Bomb on Japan in spite of Russia's imminent arrival in the war probably would not have happened and needless confrontations that lead to the cold war could have been avoided. Traditionalists would say that the Russians were being expansionary and all they wanted was to spread the tide of Communism. Revisionists would say the USA and Britain were to eager to offer the Russians one things then go back on their word, also that the Western allies did not understand Russian siege mentality and their need for security by using Poland as a buffer state. Post revisionists would say that the conferences resulted in cold war tension because of the different ideologies, which refused to allow the two sides to meet eye to eye so confusion, stubbornness and deceit occurred rather than harmony. Cold war tension arose by the end of 1945 because of the failure to finalise important issues quickly enough, which lead to mistrust, which ended up as the Cold War. Charlie Bellm 1 ...read more.