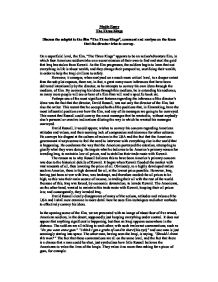 Discuss the subplot to the film &quot;The Three Kings&quot;, comment and analyse on the ideas that the director tries to convey.

Media Essay The Three Kings Discuss the subplot to the film "The Three Kings", comment and analyse on the ideas that the director tries to convey. On a superficial level, the film, "The Three Kings" appears to be an action/adventure film, in which four American soldiers take on a secret mission of their own to find and steal the gold that Iraq has stolen from Kuwait. As the film progresses, the soldiers begin to learn that not everything in life is about wealth, and they change their perspective, sacrificing their wealth, in order to help the Iraqi civilians to safety. However, it emerges, when analysed on a much more critical level, to a deeper extent than the sub plot exposes, there are, in fact, a great many more inferences that have been delivered intentionally by the director, as he attempts to convey his own ideas through the medium, of film. By conveying his ideas through this medium, he is extending his audience, as many more people will see or hear of a film than will read a specific book etc. Perhaps one of the most significant features regarding the inference of the director's ideas was the fact that the director, David Russell, was not only the director of the film, but also the writer. This meant that he occupied both of the positions that, in filmmaking, have the most influential position over how the film, and any of its messages are going to be conveyed. This meant that Russell could convey the exact messages that he wanted to, without anybody else's personal or creative inclinations diluting the way in which he wanted his messages conveyed. ...read more.

The use of retrospective irony later in the film, when the soldiers are under attack from a helicopter, and Elgin throws an American football packed with explosives at the helicopter, blowing it up, is used by Russell to ridicule the American ideas of racism. The point of racism is again emphasised when the Americans enter the bunker and find Iraqis in there with all of the merchandise that they have stolen from Kuwait. There is a television on in the background, which the Iraqis were watching, and, with a careful look, you can see that the image on the screen is a news report of when white policemen in America beat a black man. It is also echoed throughout the entire film by the constant comments from the American soldiers, such as "rag head," "dune coon" and "sand nigger". When the American enter the village, they declare that they are there for the civilian's protection and safety, which Russell uses to represent the entire lie of the American values; that they attempt to justify their own selfish motives under the pretence that they are there to help others. It is when they enter the bunker in the village and find all of the merchandise from Kuwait, that the audience realise just how rich and prosperous Kuwait is. They have technology and appliances that are of Western World standard, and the jewels etc. that the soldiers find when they find the gold serves as an indicator that perhaps it is not Kuwait that need help after all, as they are quite substantially well off. This point is extended when we see the way in which the Iraqi soldiers treat the Iraqi civilians. ...read more.

I feel that the way Russell has conveyed his opinion on American society is, to me, as a British audience, an effective way of doing so. He conveys his ideas that American society is much more flawed than is portrayed by the media. That, this supposedly democratic country still has a deep current of racism and prejudice, and a lack of consideration for other cultures running below it's "democratic" surface. That the Americans feel the need to intervene based on purely egotistic and selfish motivations. However, I also feel that the way he then uses the soldier's change of morals at the end of the film to convey what he thinks the American values should be, is also very effective as well. It enables him to convey accurately what needs to be changed in American society, and what it should become. The fact of this film is though, that the vast majority of its audience would be American. Therefore, the irony of many of the aspects of the film would be lost on them, as would the attacks on the values of American society. To an American, this film would appear to be a "Pro-America" film, and that the Americans were nothing short of heroes in the Gulf War. Due to this factor, I believe that the film is probably supposed to be used more as a subtle ridicule of the American society, rather than a dramatic attempt on the part of the writer/director to change the American values, but that it does have quite a dramatic effect when analysed on a deeper level, and serves to convey David Russell's concerns regarding the values of American society. ...read more.