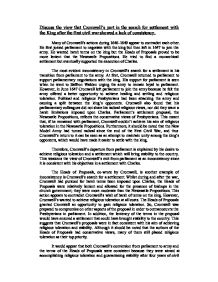 Discuss the view that Cromwells part in the search for settlement with the King after the first civil war showed a lack of consistency.

Discuss the view that Cromwell's part in the search for settlement with the King after the first civil war showed a lack of consistency. Many of Cromwell's actions during 1646-1649 appear to contradict each other. He first joined parliament to negotiate with the king but then left in 1647 to join the army. He wanted harsh terms on the king but the Heads of Proposals proved to be more lenient that the Newcastle Propositions. He tried to find a monarchical settlement but eventually supported the execution of Charles. The most evident inconsistency in Cromwell's search for a settlement is his transition from parliament to the army. At first, Cromwell returned to parliament to support parliamentary negotiations with the king. His support for parliament is seen when he went to Saffron Walden urging the army to remain loyal to parliament. However, in June 1647 Cromwell left parliament to join the army because he felt the army offered a better opportunity to achieve healing and settling and religious toleration. Political and religious Presbyterians had been attacking the army and causing a split between the king's opponents. Cromwell also found that his parliamentary colleagues did not share his radical religious views, nor did they want a harsh limitations imposed upon Charles. ...read more.

It would appear that both Cromwell's conversion from parliament to army and the terms of the Heads of Proposals were consistent because they were aimed at accomplishing religious toleration and guaranteeing stability after four years of civil war, though the methods he used to pursue those objectives were inconsistent and contradictory. Another inconsistency during Cromwell's time in the army is seen at the Putney debates. Cromwell offered the Leveller a chance to express and discuss their demands and appeared to endorse the army's political radicalism by saying that the Grandees were not "wedded and glued to forms of government", i.e. he was considering a democratic republic even though he had made it clear earlier that he intended to reach a monarchical settlement. But, given Cromwell's actions and words at the end of the Putney debates, one might consider his words at Putney were merely to appease the Levellers and maintain army unity. The Levellers' demands and manifesto, the Agreement of the People, had hampered Cromwell's attempts to negotiate a settlement with Charles. Cromwell felt that the Agreement of the People threatened the likelihood of attaining religious toleration via the Heads of Proposals. Therefore, one sees Cromwell attempting to delay the Leveller's demands at Putney because it endangered religious toleration: an aim he had hoped to achieve since the civil war. ...read more.