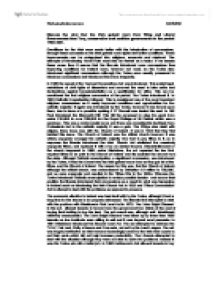 Discuss the view that the Irish gained more from Whig and Liberal Governments than Tory, conservative and coalition governments in the period 1798-1921

Discuss the view that the Irish gained more from Whig and Liberal Governments than Tory, conservative and coalition governments in the period 1798-1921. Conditions for the Irish were made better with the introduction of concessions, through these concessions the Irish gained more rights and better conditions. These improvements can be categorised into religious, economic and electoral. The attempts of introducing Home Rule must also be viewed as a factor. If we assess these areas then it seems that the liberals introduced more concessions thus improving conditions for Ireland more, however not most, as the Tories also introduced significant concessions although the Tories were usually pressured to introduce concessions and introduced them less frequently. In 1828 the repeal of the Test and Corporations Act was introduced. This ended legal restrictions of civil rights of dissenters and removed the need to take oaths and declarations against transubstantiation as a qualification for office. This can be considered the first religious concession of the period. The Tories introduced it. In 1829 Catholic Emancipation followed. This is considered one of the most important religious concessions as it vastly improved conditions and opportunities for the catholic majority. ...read more.

The liberals first attempted to deal with the problem with Gladstone's First Land Act in 1870. The 'John Bright Clauses' in the act, allowed tenants to borrow from the government two-thirds of the cost of buying their holding to buy the land. The act overall was, although well-intentioned, relatively unsuccessful. The 'John Bright Clauses' was taken up by fewer than 1000 tenants as few landlords were willing to sell and it was beyond most peasants. In 1881 Gladstone introduced his Second Land Act. The act attempted to address the "3 Fs", Fair rent, Fixity of tenure and Free sale, set out by the Land League. The act was largely ineffective as Irish farmers increasingly turned to the Irish land courts to cut their rents which did not help increase productivity. The Liberals attempted to deal with the situation although they were not able to solve the problems. Instead it was the Tories who did a better job. In 1885 Ashbourne's Act allowed tenants to buy their land by setting up a fund and providing loans where repayment was affordable. The Irish Land Question was finally answered with the Wyndham Act. ...read more.

The Second Home Rule Bill differed to the first, but was again introduced by Gladstone, it allowed for the eighty Irish MPs to vote in Westminster but only on bills that affected Ireland. The bill was passed in the commons but rejected by the Lords which was controlled by the Conservative Party. Asquith, a liberal, introduced a third Home Rule, which was very similar to the Second. The act was rejected by the Lords three time, but the Act of Parliament in 1911 meant that the House of Lords were no longer able to permantely veto bills. The liberals clearly played the main role in attempting to introduce Home Rule. In 1920 Lloyd George introduced the Government of Ireland Act which divided Ireland into two territories that were self governing. In 19921 Dominion powers were granted. These were enforced by a coalition government but it was clearly the Liberals who were instrumental in bringing this about due to their prior effort. The Irish people gained most from the Liberal government overall. However the Tories did bring about a number of important concessions and dealt with the economic situation better than the liberal governments. More was gained from the Liberals as they introduced more concessions and reforms often they started the process from which Tory or Coalition governments completed. Nicholas Subramaniam 13CMH6 ...read more.